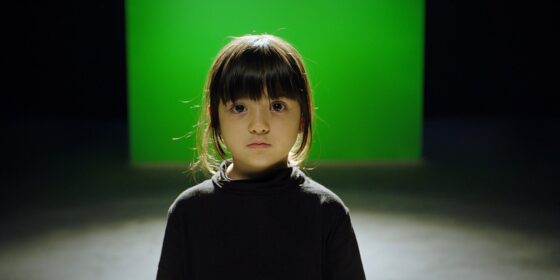 On a large, bare soundstage, actors dressed in street clothes and day-glo blue boots gather to play a curiously shaped morality tale set in Abadan, an Iranian town near the country’s border with Iraq. The props and settings—a police station, a pair of apartments—are plainly artificial, rendered in green-screen green; the narrative mechanics are likewise foregrounded, as they move in reverse through three cleanly demarcated acts. In these basic contours, Simulation is of a piece with certain trends in contemporary Middle Eastern art: its reflexive obsession with cheap artifice is a cousin to the concerns of artists like Sophia Al-Maria or GCC, whose work burrows into the brittle surfaces of the region’s extreme concentrations of wealth, the secondhand opulence of its shopping malls and luxury developments. And its narrative, with a focus on the slipperiness of moral ground in a moralizing official culture, bears obvious traces of the country’s recent exports onto the global market for art-house cinema.

Suggesting a world made of green screen might have played as cheap sci-fi shtick, but here, in the context of a story which often left me feeling that there were allegorical dimensions hovering just out of my grasp, it catches a productive local perspective on the Middle East as a site onto which the rest of the world regularly projects its own visions. However, while the film’s conceptual achievements are considerable, the experience of watching it proves to be by turns tedious and grating. The pleasing negative space of the sets is constantly buggered by a hyperactive camera, and the narrative is an underbaked slice of “he said, he said” which turns on a moment of drug panic I hope is intended as satire. First-time director Abed Abest also stars, and neither he nor anyone else in the cast manages to sell the script’s wild swings between hot-blooded confrontation and woozy reverie. Still, whatever its failings of craft and drama, Simulation lingers for its ideas, which converge on the past’s unwillingness to stay in the past: the absence of old-fashioned cinematic illusion takes on a dark current against the setting of Abadan, where nearly 500 people burned inside the Cinema Rex in 1978 amidst the escalating tensions of the country’s revolution, while the absence of Abadan itself, with only a soundstage left in its place, echoes the destruction wrought on the town early in the Iran-Iraq War.