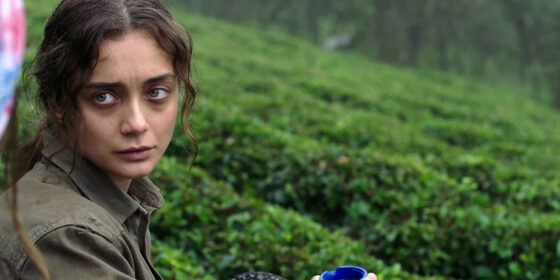 A movie like Sibel brings out all the worst instincts in programmers working for festivals striving to present a wide range of contemporary international cinema, and, in the bargain, attract buyers. Sibel ticks off so many currently hot-button-category boxes that it’s a kind of a festival porn piece: Girl Power, physical disability, fairy tale, terrorism, stultified past vs. progressive future, and, especially, the surefire draw of exotic rural Turkey, the country that the West wants to be close to its bosom yet still can’t figure out. A few of these elements have helped an authentic and self-renewing artist like Nuri Bilge Ceylan thrive in Western festivals and beyond, but in the hands of co-directors Çagla Zencirci and Guillaume Giovanetti and co-screenwriter Ramata Sy, they mould and decay into a musty laundry list of formula items for that ongoing project How to Sell a Foreign-Language Feature in an English-Language Market.

Sibel (Damla Sönmez) is the somewhat rebellious eldest daughter of the mayor of a hilly village in northeast Turkey. She can’t speak, but easily communicates by an unusually physical type of whistling that everyone in the village has apparently mastered. Indeed, Sibel turns her whistling from handicap to verbal weapon, especially when sparring with her obnoxious, ultra-obeisant younger sister Fatma (Elit İşcan), a tiresome character and an obvious study in conformity. Sibel has it in her head that if she captures a mythical wolf that villagers believe roams the nearby woods, she will get the locals’ respect; this crucial story point makes no sense as the scenes are played, since Sibel hardly wears a scarlet letter of scorn in town, and is only an outcast in the eyes of Fatma and her fellow teen brats.

The movie constructs plot complications that never complicate, with dead-end storylines involving a wounded army runaway being sought by authorities as a “terrorist” and an old biddy lost in a cloud of regrets and curdled memories. Clearly made with ambitions of saying many politically pointed things in a country run by a ruthlessly retrograde and patriarchal regime, Sibel deflates before it’s over, in one of the year’s weakest and least consequential denouements.