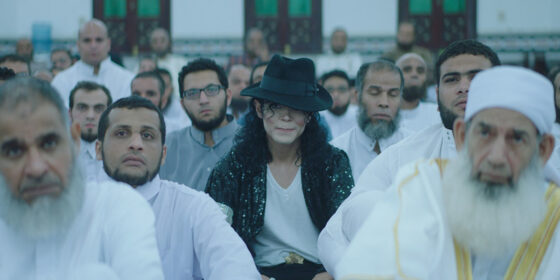 Michael Jackson’s death sent shockwaves through popular culture around the world. Amr Salama’s film measures its impact in Egypt through the story of a young Imam (Ahmad Alfishawy) whose reaction to the news unearths memories and emotions he had thought long buried. On the surface, the sheikh’s life seems to be going smoothly, with a wife, a daughter, and a fervent devotion to God, but Jackson’s demise throws his life out of balance. As a teenager (Ahmed Malek plays the younger version of the shiekh,) he had cocooned himself in the Gloved One’s image as a way of coping with his mother’s death and the actions of his brutish father (Maged El Kedwany); Jackson’s music and persona offered an outlet for a lonely young man to express himself (plus, his mother had been a fan). In his present reality, however, he cannot reconcile the feelings he still has for the now-posthumous King of Pop and his religious devotion to Allah. And, slowly, he begins to have visions of Michael Jackson taunting him into Hell.

Salama’s film uses the figure of Jackson (whose contribution to Egyptian culture begins and ends with the “Remember the Time” video) to embody its protagonist’s difficult relationship to masculinity. But Sheikh Jackson doesn’t develop these conflicts in a way that is truly satisfying: the script softens certain issues, working towards tenderhearted resolutions rather than really delving into the muck of generational battles over masculinity. Where the film succeeds, however, is in making a case for the immortality of pop culture and the divinity one finds in the saints of youth. It is no real coincidence that a poster of David Bowie hangs in the local club the young sheikh frequented when he was a teenager: musicians like Jackson and Bowie, who help their fans cope with the troubles of the world through their sheer presence, become as vital an expression of religion as anything scriptural. That lived-in power comes through in Sheikh Jackson, despite its shortcomings.