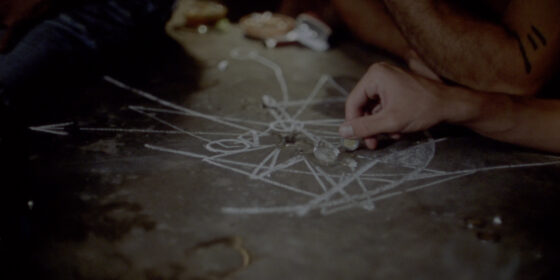 Now more than ever, the perilous state of our dying planet and its precarious global landscape demand a seismic reexamination of how we’ve engaged with the world, and the ways in which capitalism has ushered in society’s geological, moral and spiritual rot. As our environmental anxieties increasingly shift into existential ones, one can’t help but look to the past as a way of questioning how the heck we got here, and scrutinize the forces underwriting our moment of despair and decay.  Consequently, the natural desire arises to want to understand the origins and implications of this decline—and doing so means delving into the complex philosophical, historical, psychological and literary tapestry that is the human experience. It is this tapestry that synergistically informs Canadian filmmaker Andrea Bussmann’s solo 2018 directorial feature Fausto (Faust), lending this modest , meditative short feature an air of immediacy, relevance and urgency.

Using the classical, semi-autobiographical and much re-interpreted German legend of Johann Georg Faust as her connecting thematic tissue, Bussmann turns her lens on the denizens of a small Oaxacan coastal town, whose apparitional fables and local legends are the glue that connects past and present—a present that for them is still defined by the specter of industrialization and expansion. To cope with these changes, tales of witches, shapeshifters and the like have permeated the population’s collective consciousness throughout the centuries; their ubiquity today informs both these native peoples’ ancestral roots and their contemporary cultural identity.

Embracing these sublime stories of the supernatural allows Bussmann to raise questions about the limitations of the tactile world and the follies of our egocentric, superficial engagement with it—and because this engagement relies almost entirely on what is concretely visible, the visual benefits afforded by the cinematic medium allow Bussmann to further drive home this point: by forcing us to reconsider our own limited scope of vision in this way, Fausto draws a potent distinction between perception and knowledge, while simultaneously throwing into doubt our static notions of the borders between reality and fiction, visibility and invisibility. Ironically, the film’s infusion of ancient native folklore anchors its quasi-documentary critique of capitalism to present-day Faustian themes, resulting in an experimental rendering of the classic parable that examines Western civilization’s legacy of colonialism and exploitation. The celestial mythologies and oral traditions that have passed down through the generations of these colonized people–and form the bedrock of their social fabric–serve as a stirring, mercurial testament to this legacy.

Fernando and Alberto, friends and co-owners of a small beachside bar, are looking to expand their establishment. They enlist the help of Zaid, a cartographer and translator, as well as their friend Victor—and we soon come to learn that this expansion threatens the last piece of land in the area that once held a witch’s den. They recall a memorable encounter they had one night with a French nobleman, who approaches the two proprietors seeking employment and shelter. With nothing to give them as collateral, the man leaves behind the one possession he has: his shadow. One day following the Frenchman’s sudden disappearance, Fernando and Alberto vow to search for his shadow every night; so struck were they by the impression this beguiling man left behind.

In Goethe’s epic poem of Faust, this shadow is personified by Mephistopheles, a devilish, handsomely charming figure that approaches Faust with the promise of unlimited knowledge, hedonistic pleasures, and worldly experiences. Faust, having reached the height of professional success yet still disillusioned by the boredom of life, accepts this wager and forfeits his soul in return. Although the business ventures of the film’s four main subjects paint each one of them as Faustian to some degree, it is through their stories—particularly the one involving said Frenchman—that the film’s most explicit and potent references to the literary fable come into play.

In the centuries that followed the publishing of Goethe’s poem, numerous iterations of “Faust” have appeared throughout classical art and pop culture, though one constant that remains is the myth’s fixation with nature as a way of helping us understand ourselves and our place in the world. Here too, nature serves as a fundamental bridge to the past; a lens for introspection; and a humbling reminder that we are but one tiny dot in a much larger, immeasurably stellar, grand design. Bussmann was also inspired by Gertrude Stein’s adaptation of the poem, which presents technology and modernity as direct foils to enlightenment, and as with Stein’s version, the appearance of an artificial light in her film serves as a visual marker of capitalism’s burgeoning corrosion. Because Faust is unable or unwilling to grasp the universe’s cosmic sense of belonging and achieve this spiritual harmony, he ironically fails in his very mission to unlock all its mysteries and kernels of knowledge. This rejection of nature precipitates Faust’s moral vacuity past the point of redemption—which both the film and its literary predecessors argue is the logical outcome of what happens when you make a deal with the devil and compromise one’s values and sense of community for material comforts. It is this selfish temptation to abandon what is virtuous and for the greater good, in favor of what is easy and instantly gratifying, that has plagued the human experience for millennia, and Fausto’s reverence for nature and the animal kingdom is Bussmann’s way of reminding us of the fallacious hubris in trying to contain Mother Earth and domesticate her children according to our myopic and ignorant whims—the consequences of which we will be grappling with for centuries to come.

While the film presents nature as an ephemeral, enigmatic corrective to the human condition’s shortsighted recklessness and self-destructive greed, its fascination with the immaterial world—verbally communicated in local mythologies and visualized through long, brooding shots of natural vistas—emphasize the moral lessons to be gleaned.  Indeed, upon first viewing the film, I was flummoxed as to how stories of witchcraft and wizardry could possibly feature (prominently, no less) into a documentary, in which tales of black magic and animal telepathy are delivered with the same matter-of-factness that’s used to communicate random snippets of local history or scientific nuggets of wisdom about horse blind spots. It isn’t until the film’s second half that Bussmann’s recurring motifs and motivations begin to truly crystallize, when the delineation between fact and fiction, science and storytelling, and the material and immaterial world has completely dissolved.

Borrowing heavily from lore and anecdotal gossip, Bussmann structures Fausto around scripted interviews with actual residents that she wrote herself, save for one with an American expat. Speaking in Lebanese Arabic, French, English and Spanish, these subjects regale us with everything from charming musings on regional curiosities (the zoo of entirely blind animals headed by a one-armed zookeeper who only ventures into town at night for fear that he will see the shadow of his severed arm); to historical legends (the story of how Christopher Columbus stole the moon using the information gleaned from an almanac); and stranger-than-fiction local trivia (how the screen of every tech device turns black on the beaches due to the high iron content in the sand); to outright fanciful yarns about ghosts, spirits and shadows that are the stuff of urban legend—and this framework allows the film to thematically invoke “Faust” without directly adapting it to the screen—to say nothing of how forgoing the use of actors in favor of actual residents (save for perhaps the omniscient God-like narrator whose presence informs the film’s deified ambiance) allows the film to still technically fall under the purview of documentary.

Indeed, shadows—that liminal space between the known and the unknown, between the tangible and the evanescent (which could arguably be considered human blind spots)—are perhaps the film’s most compelling motifs. They occupy the tension between physical and psychic spaces—when asked about the film’s use of shadows in an interview with MUBI, Bussmann replied “it is the invisible that makes the visible possible”—and Fausto elegantly navigates this tension through the near-total darkness of its imagery; shot mostly at night, with frames that often linger on barely discernible coterminous landscapes and the nocturnal sky, in such a way that the out-of-focus specks of light we see may or may not be stars, or they may simply be eye floaters. Although Bussmann shot the film with a Sony A7 camera—known for its high resolution in dark environments—she transferred her work onto 16mm film, and the result gives Fausto’s visual palette a bloated, faintly blurry lo-fi aesthetic that brings to mind grainy 20th century ethnographic footage.

This metaphysical fixation with shadows helps explain the film’s obsession with obstructing our visual clarity—subjects too are often barely illuminated by candlelight—by forcing us to reconsider what is literally in front of our eyes. Though this may make for a visually destabilizing and impenetrable viewing experience, this is all in line with Bussmann’s own grand design, which urges us to accept that certain things in life simply cannot be rationalized. And just as truly nocturnal animals cannot be domesticated, we cannot contain what we cannot see–we can only respect and appreciate it. Luckily, Fausto isn’t interested in being contained, instead choosing to thrive unencumbered in a kind of otherworldly register—an astral plane so to speak—that seeks to dismantle our material construction of the world in favor of a more holistic, expansive and divine approach. The same could be said for Bussmann’s own craft, for although Fausto is ostensibly billed as a documentary, she liberally toys with the form to produce an avant-garde hybrid between anthropological super-8 reels and art-house cinema that largely operates outside the narrow margins of human visibility. By challenging our visual interpretation of the film and upending our expectations of what a documentary can be, Bussmann forces us to reconsider the genre’s parameters, not to mention Fausto’s lack of defined boundaries is itself a meta-commentary on the film’s recurring themes of fiction vs. reality; the dualities of existence and perception; metamorphosis and mutability—themes that she previously visited in her Kafka-esque Tales of Two Who Dreamt (2016). With her first feature solo outing, Bussmann brings a mystical and metaphysical gravitas to what is not only a celebration of nature’s wondrous abstractions, mysteries and ambiguities—but also (and more importantly), an act of wistful, ruminative mourning for a vulnerable planet and its communities that is both timeless, and uniquely plugged into the current moment. At one point in the film, the narrator declares, “shadows are uncontained memories”. If this is true, then Fausto’s dissolution of the boundaries within both the cinematic medium and the physical world should provide the most handsome canvas for these memories to roam free. The question that remains, however, is whether we’re even ready to tap into them, and for the moral reckoning they will bring.

Visual obfuscations, aural ambiance, the elasticity of perspective and the lingering presence of what can’t be seen also find a home in Lina Rodriguez’s tranquil Ante Mis Ojos (2018), a spiritual cousin of Fausto that takes an illusory look at Colombia’s Lake Guatavita; thought to be the inspiration for the legend of El Dorado throughout the centuries.  Like Bussmann, Rodriguez uses grainy footage, atmospheric sound design and local parable as context to present an allegorical view of the mystical marriage between nature and fantasy, and the space that occupies earthly transcendence.  In this space, even tourists can seem like phantom wanderers.