SFIFF 2011: Encounters at the End of the World 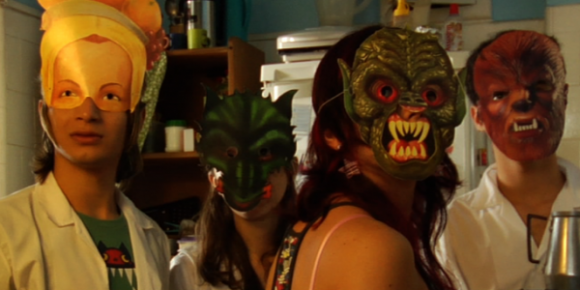 It was perhaps inevitable that my karaoke selection during a Jameson-soaked next-to-last-night party for the 54th San Francisco International Film Festival was “It’s The End Of The World As We Know It.” This year’s selection (or at least what I saw of it on an abbreviated jaunt for FIPRESCI jury duty) was heavy on end-of-days fables, from Mike Cahill’s literally and figuratively fuzzy multiverse story/Sundance buzz item Another Earth, starring the imminently ubiquitous Brit Marling (who also co-wrote the screenplay) as an ex-felon brooding on the possibilities of meeting her interplanetary doppelganger, to South Korean rookie Jo Sung-Hee’s cruel travesty of virgin birth myth tropes in the awful End of Animal, a sort of junior varsity Time of the Wolf (2003) (with an actual symbolic white wolf).

I wasn’t quite sure what to make of the well-travelled Brazilian film The Joy (A Alegria), a handmade “superhero” movie which finds a troupe of nubile and indomitably spirited young things combating what they perceive as the end of the world via communal expressions of exuberance (as opposed to the kids in the underrated and much walked-out-on Serbian Jackass-riff Tilva Rosh, who opt for getting wasted and punching each other in the nuts). Suffice to say that if there’s genuine warmth and charm to be found in The Joy (part of a proposed trilogy by co-directors Felipe Bragnanca and Marina Maliande), it lies in its commitment to shoestring magic realism, including a thrift-store sea monster that nods to Apichatpong. Whether or not that’s enough to sustain a 100-minute feature is another question.

A far more severe—indeed, Joy-less—evocation of apocalypse could be found in Christoph Hochhäusler’s The City Below, getting a coastal engagement nearly one year after its mostly sniggering critical dismissal at Cannes, where it was slighted via comparisons to Wall Street: Money Never Sleeps—a juxtaposition that’s unfair to both movies. (I missed Oliver’s Stone’s Q &A in the early days of SFIFF, but I’ll wager not nearly enough time was spent talking about how American critics apparently cannot recognize satire when it literally walks up and smacks them in the face.) Anyway, I liked The City Below, which follows Jerichow (2008) by grafting a larger allegory onto a generic triangle. The vertices have deracinated and rearranged from Christian Petzold’s film: in lieu of an older husband self-destructively shoving his wife into the arms of another man, The City Below focuses on a middle-aged banking titan’s (Robert Hunger-Buhler) attempted theft of a younger subordinate’s wife (Nicole Krebnitz), a seduction he carries out with the same ruthless dispatch as his corporate takeovers. Her wary receptiveness to his advances—especially after he clears a path by sending her husband to Jakarta with a sketchily justified promotion—recasts a patently predatory scenario into something else: a tale of monetized amour fou. Call it Late Capitalism: A Love Story.

The process by which these two flatly incompatible characters come together isn’t really dramatically convincing, and the performances have the sort of tranced-out quality that’s sometimes indicative of a lazily detached approach to characterization, but the filmic space is precisely realized. While Michael Sicinski has already noted how a good deal of the film’s graphic power derives from its vertiginous, wildly dislocating presentation of the Frankfurt skyline (and correctly cited Ernie Gehr’s Side/Walk/Shuttle [1991] as a direct aesthetic influence), the film’s primary visual signature is horizontal, with key sequences described via staggered lateral pans (tracking shots broken up but never halted by discreet, judicious cuts).

The selective mobility of Bernhard Kehlher’s cinematography connects to the underlying and troubling theme of crossover in Hochhäusler and Ulrich Peltzer’s screenplay; we see how the the decaying master-of-the-universe and his supple young bedmate each recognize and covet something in the other, desire catalyzed by fear and disgust. The point at which the ideological gulf between them vanishes completely is also the point at which the narrative world implodes. The almost comically abrupt ending suggests a blink-and-miss-it Roy Andersson, but it’s a conceptually slipperier apocalypse than those in Songs from the Second Floor (2000) or You, The Living (2007), equivalently (and provocatively) legible as a by-product of one character’s moral evacuation or another’s attempted reclamation of the ethical high ground.

If The City Below thinks global with regards to the collapse of the market, Sebastien Pilote’s  FIPRESCI prizewinner Le Vendeur—one of only three Canadian features in the entire programme, along with Incendies and Lynn Hershman Leeson’s !Women ArtRevolution—thinks local: it’s set in Dolbeau-Mistassini, a small town a few hours outside of Quebec City reeling from the effects of a pulp mill strike. The title character is a widowed, sexagenarian car salesman named Marcel Levesque (Gilbert Sicotte), whose dealership has suffered in agonizingly drawn-out lockstep with its impoverished clientele. A practiced soft-sell virtuoso, Marcel finds himself unable to foist new-model pick-up trucks       on customers who are still paying off the old ones.

But this is not a movie about an aged predator coping with the thinning of his herd, or even a paean to the fortitude of a closely knit staff. Instead, it tries to understand why a healthy, charming and accomplished man in his late sixties who has hit a modestly prosperous professional ceiling insists on plying his trade well past retirement age. “As long as I can work, I’ll work,” he tells his daughter Maryse (Nathalie Cavezzali). It’s a matter-of-fact statement with an existential undertow. Having given most of his adult life to his job (he even lives in a house on the edge of the lot), Marcel’s terror at the larger implications of stopping is clear to us, even if it’s smoothly concealed from Maryse and her young son Antoine, whom he dotes on like a father.

The dichotomy here is between a man sustained—and consumed—by his vocation and  a town full of men scraping for jobs. There is a sense in which Sicotte’s performance is the movie; he gives Marcel the sly, watchful gentility of a handshake-school operator, a guy who isn’t trying to put one over on people but who isn’t above prodding their soft spots to make a sale. But the surrounding characters are also sharply observed—there’s a scene at a bingo-hall dance that locates the fear and uncertainty at the edges of the communal merrymaking—and Pilote never loses sight of the larger community even as he tightens his narrative focus on Marcel. One of Pilote’s sharpest devices is the use of title cards to indicate the passage of time, using the mill closure as ground zero. The film opens 239 days after the beginning of strike, and the tension is subtly ratcheted up with each hard cut to black, obviating the need for too much exposition.

Le Vendeur is not entirely subtle: the opening sequence, which describes the removal of a dead moose from a rural highway, is arresting but is also too obviously grim to be a non-sequitur, portending doom in a way that arguably works against Pilote’s naturalistic approach. I also spoke to some people who thought that the inevitable narrative payoff (which is easier to see coming than a moose on the highway) cheapened the film by imposing a sense of some larger (cosmic?) retribution on a figure who had previously been observed without judgment. I’m not sure about that myself, since Pilote extends the action beyond what would have been a logical (and melodramatic) endpoint for a more attenuated fade-out. The ending isn’t vapourously “ambiguous” in the contemporary art-house fashion, but authentically ambivalent in a way that suggests directorial humility rather than high-handedness. Pilote’s debut shows assurance but not arrogance; the best thing about Le Vendeur is that isn’t selling anything.