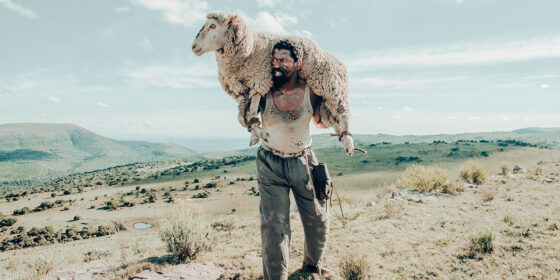 If 2018 may be remembered as the year when the movies finally realized that Afro-futurism was a viable genre, it may also be remembered as the year when the African Western finally got some mojo. It’s been a long, long time since Moustapha Alassane’s The Return of an Adventurer (1966), and on the heels of Five Fingers for Marseille (2017), Sew the Winter to My Skin suggests that South Africa’s apartheid era is such a natural setting for a Western revival that one wonders why it took so long for the breakthrough to happen. This question opens up a complicated set of issues and cultural cross-currents—to say nothing of the erratic yet always potentially promising state of South African film production—that we don’t have room for here. But what both movies indicate is something that’s distinctly apart from either art cinema or mainstream product created by black African filmmakers for a wider audience.

In describing Sew the Winter, writer-director Jahmil X.T. Qubeka—who made a name for himself with Of Good Report (2013)—has unhelpfully alluded to everything from Stalker (1979) to Fantastic Mr. Fox (2009) as reference points. Try Robin Hood and the Native American coyote character instead: his epic depicts a brazenly independent man named John Kepe (a balls-to-the-wall performance by Ezra Mabengeza, who’s required to dodge hundreds of bullets, jump off multiple cliffs, and, during one sequence, run around covered in shit), who robs sheep from Nazi-symp landowner Gen. Helmut Botha (Peter Kurth) to feed starving folks in his Xhosa tribe. Even better, the narrative’s relentless sequencing of pursuits by Botha’s posse of Kepe, who takes on the mythic guise of Samson, links it with Abraham Polonsky’s Tell Them Willie Boy is Here (1969), which similarly adapts an actual incident of a racist white manhunt of a so-called “criminal” as a means of systematic oppression.

Qubeka displays instincts for both political allusion and big-screen entertainment: his script is nearly free of dialogue (I clocked the total at just over a minute), dependent purely on action and occasionally creaky flashbacks (in the form of a white journalist who develops sympathy for Kepe’s cause), expressively staged set pieces, and Leone-esque widescreen close-ups. Never have so many white men with rifles missed their target as Kepe almost magically eludes capture, but in the end, the system has its way—though Qubeka ensures there are a few tastes of ironic vengeance. The fascinating soundtrack’s highly unusual source is a collage of music composed by Braam DuToit for the stage, one sign among many of a work that doesn’t easily fit into the categories typically expected of movies at an international film festival, or of what’s currently perceived as cinema from Africa.