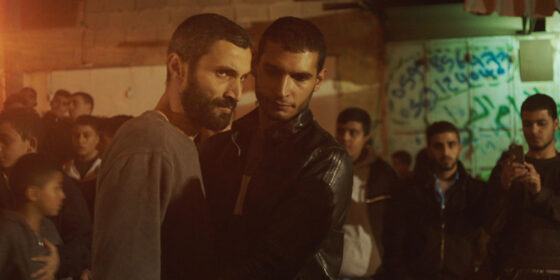 Screwdriver burns through so much narrative in its first 20 minutes that the various steps in how Ziad (Ziad Bakri) goes from being an innocent child to a world-weary adult feel more like a blur than a necessary psychological foundation. Yet even when the pace lets up to focus on his attempts to readjust to life in Ramallah after a decade spent in an Israeli jail, the general bluntness of intent remains the same—which makes it hard to get inside the head of this noble Palestinian fall guy, no matter how effectively the talented Bakri is able to convey his feelings.

The teenage Ziad leads a comparatively carefree life on the West Bank, until one of his clique is gunned down by a sniper without warning. When his friends carry out a reprisal on a settler, Ziad takes the blame and is consequently handed a lengthy prison term. Upon his release, everything has changed: smartphones are ubiquitous, buildings are shooting up, and trendy coffee places are the order of the day. Everyone wants to help Ziad reintegrate: one of his former clique organizes him a job in construction, his sister sets him up with a friend, and a Palestinian director wants him to take part in her new film project as a way of coming to terms with his experiences. Yet all this assistance often feels more like pressure, which merely exacerbates Ziad’s disorientation, rootlessness, and profound mental trauma.

With Zid presumably meant as an exemplar of sorts, the story exudes a righteous anger which frequently curdles into over-directness. Most characters come across like mere vehicles to highlight a different aspect of Ziad’s plight, spouting dialogue that seems more interested in making sweeping statements than generating the sort of nuance that might aid identification. Bakri’s face and eyes go at least some way to resetting the balance here, as the actor’s sheer intensity of expression is always alluding to the more complex feelings left unaddressed by the script. And one late scene illustrates how Screwdriver might have functioned with more chance to breathe: when Bakri and his mother spontaneously sing together in the kitchen, it says far more about returning home than any amount of tub-thumping.