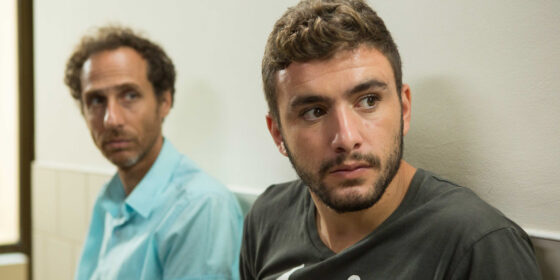 While understatement is usually preferable to shouting, it can also become too much of a good thing, as Scaffolding (not to be confused with Kazik Radwanski’s new short film, the far better Scaffold, which screens in Wavelengths prior to Denis Côté’s Ta peau ti lisse) neatly illustrates. While Matan Yair’s debut feature manages to sidestep or underplay the most egregious of narrative clichés, it doesn’t offer much of anything in their place; applying endless modesty and restraint to a broadly familiar blend of daddy issues and coming-of-age tropes doesn’t render them any more memorable.

The tempestuous Asher (Asher Lax) is in the final throes of graduating from high school, which his flagging yet still domineering father (Yaacov Cohen) sees as largely unnecessary, as his son is predestined to take over the family scaffolding business. As meek at home as he is disruptive at school, Asher clearly lacks the proper focus for academic success, yet is still strangely fascinated by his equally conflicted literature teacher Rami (Ami Smolarchik), who is the only person aside from his father to show more than a glancing interest in him. Yair is careful to evade the Dead Poets Society stylings inherent to this plot, and ensure that Asher remains as spiky at the end of the film as he is at the beginning; both the big cathartic outbursts of emotion or convenient final-act redemption one would expect to materialize remain conspicuous by their absence.

Yet although Scaffolding shuns moments of easy drama, the film is still incapable of crafting more complicated ones to replace them, as Yair remains too beholden to the script’s muted twists and turns to devote much attention to ambiguity or atmosphere. And there’s also little in the way of form to pick up the slack, as the timid handheld camerawork, polite ellipses, and pointed lack of music, leavened by the occasional deliberately jarring transition, are all as placidly unassuming as the narrative. Even if Asher’s path through anger and disappointment eventually ends up much where it began, there’s still no need for stasis to be quite this static.