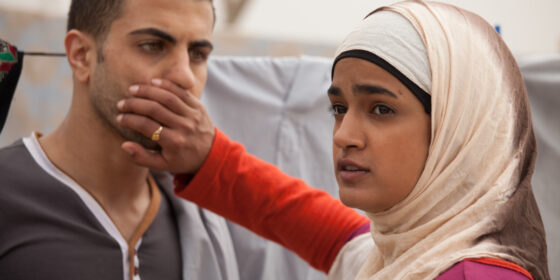 Tradition at loggerheads with modernity: that ancient “world cinema” chestnut gets another diffident tango in Elite Zexer’s Sand Storm, concerning a Bedouin family in the south of Israel. Ruba Blal-Asfour stars as Jalila, a steely matriarch with no choice but to suffer in silence as her husband Suliman (Hitham Omari, who also appeared in Yaelle Kayam’s Mountain) takes on a second marriage to a younger woman; meanwhile, their daughter Layla (Lammis Aymar) has struck up a relationship with a boy outside the tribe, flaunting her parents’ expectations for an arranged marriage. The conflict between mother and daughter touches on the intra-familial hypocrisies and deferred traumas that get passed between generations (Bedouin or not), but unfortunately, the filmmaking stays at a dry (if not arid) remove. Entirely the type of impressive debut festivals are constructed to encourage, Sand Storm refuses to lean in any one character’s favour—an ostensibly admirable manoeuvre, but one that left this viewer precious little to imagine outside Layla and Jalila’s slow-simmering conflict. The resultant picture manages to shun psychological interiority and its incipient claustrophobia at the same time, greasing narrative gears for an inevitable mother-daughter capitulation. Despite a startlingly barbed send-off, the film’s strongest virtues simply evaporate; as ever, it’s hard to escape the sense that the more radical filmmaking is happening elsewhere.