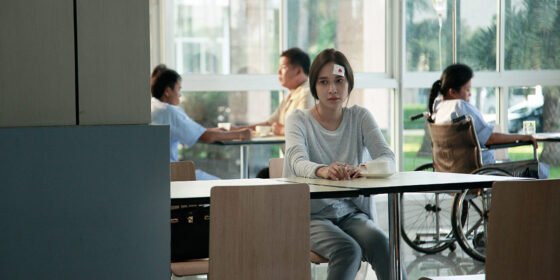 Six years after his last fiction film Headshot (during which time he made Paradoxocrazy, a documentary chronicling Thailand’s political history), Thai auteur Pen-ek Ratanaruang returns to the festival circuit in fine form. At times noir-ish, at times cheeky, and at times a little too self-aware, Samui Song thriller surfs in and out between straight genre exercise and winking critique of many things: blind faith, crypto-Buddhism, marriage, filmmaking, patriarchal oppression. Cherman Boonyasak, a popular TV actress and Pen-ek’s lead in his 2003 hit Last Life in the Universe, plays Vi, a soap-opera star stuck in an unhappy marriage with Frenchman Jerome (Stephane Sednaoui). Both of them practice meditation (as all unhappy couples in Thailand do) at a forest monastery lorded over by the sinister Holy One (Vithaya Pansrignam, sticking close to his favourite mould of a Buddha-like villain), who thrives on fat donations from his wealthy disciples; when Vi runs into Guy (David Asavanond), an assassin with a sick mother to care for, she sees a path towards liberation. What follows is Pen-ek’s familiar juggling of messy crimes and black comedy of character—with a nod to Buñuel to boot when the action shifts to the island of the title, and Vi undergoes a transformation both cinematic and metaphysical.