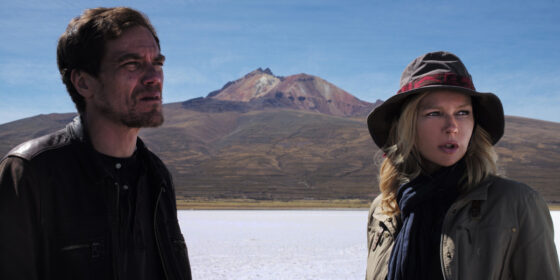 In an ideal world, some things wouldn’t be possible in international cinema, such as Kim Ki-duk making any more movies. (Actually, China is doing its bit for that cause, in its own dubious way, right now.) Another would be that Werner Herzog couldn’t make any narrative features in English. The man, so wonderful to listen to in his non-fiction films as he narrates away in his deliciously thick German accent, has a tin ear for English dialogue spoken by actors. Even more, he can’t write for these actors, though it may be possible that he writes his original dialogue in German and then has someone else translate it (horribly). The one case of an English-language fiction movie by Herzog actually sounding right, Bad Lieutenant: Port of Call New Orleans (2009), can now be seen as a fluke. His latest stab at English, Salt and Fire, is a slow-motion car wreck of an enterprise, nothing more than an exercise in wasting people’s money and precious time. The notion that the good people of Toronto shelled out north of 40 loonies for a screening of this during TIFF is one of those cases where non-paying journalists must simply feel sorry for them.

But the notion that the terrible and terribly successful German actor Veronica Ferres, whose Munich-based Construction Film was silly enough to produce this, might lose the most is a case of just desserts. That’s because Herzog and Ferres together decided that she should take on the lead role as an environmental scientist, leading a UN delegation including an absurdly confused and quickly dispatched Gael Garcia Bernal (whose Canana was also foolish enough to toss in some production cash) to investigate a Bolivian eco-disaster. Once on the ground, they meet a strange group that immediately kidnaps them. They’re led by an evidently evil CEO named Matt (Michael Shannon) who says such drivel as “do not come to the aid of a tired world.”

Much of the rest of Salt and Fire is either Ferres and Shannon discussing such matters as whether reality can be measured or not in Shannon’s rambling colonial mansion, or Ferres deposited with a few provisions and two little boys at an island in the middle of a massive salt flat—location of said eco-disaster. The first half may aim to be a two-hander in the realm of one of David Hare’s political dramas, and the second half a cockeyed Crusoe adventure, but neither section coheres or for a single moment sounds credible. Worst of all, Ferres, who obviously can’t act in English, is in every scene. Shannon, who has managed well with Herzog before in My Son, My Son, What Have Ye Done (2009), appears this time more lost than the German soldier at the end of Herzog’s Lebenszeichen (1968). It ain’t a pretty sight.