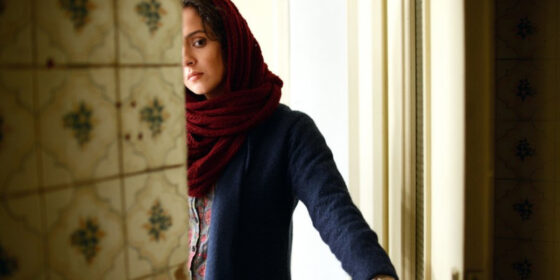 “Attention must be paid”—the most famous line from Arthur Miller’s Death of a Salesman might well sum up the narrative trajectory of Asghar Farhadi’s latest. The protagonists of The Salesman are both performers in an amateur production of Miller’s play that functions as a de facto framing story, and the late American playwright’s liberal humanism meshes well with Farhadi’s agenda. Both Farhadi and Miller are fond of schematic narratives and cannily deployed didacticism; the strengths and weaknesses of this sort of social realism are crucial to assessing the muddled aesthetic achievement of a film that doesn’t replicate the impact of A Separation (2011), the director’s finest achievement, but avoids the embarrassing histrionics of his previous (and weakest) film, The Past (2013).

A masterful chronicle of the Iranian middle class, The Salesman depicts a crisis in the stormy marriage of Emad (Shahab Hosseini) and Rana (Taraneh Alidoosti). After quickly escaping a collapsing building that is an omen of more turbulence to come, the misleadingly serene couple move into a new apartment that serves as the focal point for one of Farhadi’s trademark marital squabbles. When a mysterious intruder assaults Emad’s wife, this seemingly mild-mannered schoolteacher becomes something of a vigilante. As he finally confronts his wife’s attacker, his sadistic streak comes to the fore. It soon becomes clear that Emad, who is as contemptuous towards his victimized wife as he is towards her victimizer, is suffering from a bad case of male hubris. Even though this realization is driven home rather ploddingly, the expert performances of the two leads make the film worth seeing.