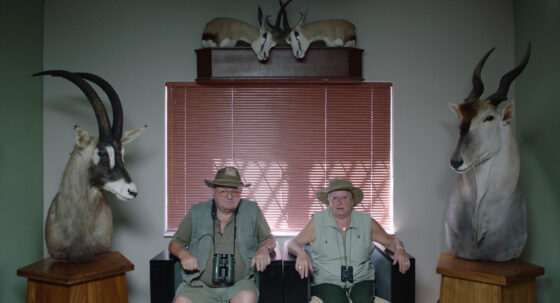 No film in the history of cinema has showcased the folding of dead animals as diligently as Ulrich Seidl’s Safari, in which the audience can witness the mind-boggling sights of a (presumably) killed giraffe—its gigantic, twisted, fragmented-looking body more surreal than any art installation, yet seemingly a “perfectly natural” image within the context of everyday trophy-hunting—about to be hauled into a jeep which seems way too small for the huge payload. (And then there’s the way a zebra’s skin is densely folded until it’s the size of a tiny cube.) Seidl’s exploration of the mostly uneventful life of European hunting tourists in the African bush developed logically from his 2014 project In the Basement (one of the Austrian basements explored was filled with African animal trophies, and their owners are among the new film’s protagonists), and once more Seidl probes the dark side of human nature with deadpan acuity.

Despite an abundance of absurd hunter’s jargon and real-satirical situations characteristic of Seidl’s dark humour—hours of waiting for prey in deserted landscapes, beer in hand, intermittently falling asleep—Safari emerges as one of his darkest works overall, both for the offhand candour with which it zeroes in on the sexual allure of ritualized killing (which nevertheless emerges as resolutely unsexy) and for the extension of his portrayal (less overtly satirical than in Paradise: Love [2012], though no less distressing) of the continuation of colonization. Some of the film’s most shocking shots don’t involve animal cruelty, but rather consist of Seidl tableaux in which the African populace and its stuffed animals are disconcertingly interchangeable on a first, horrified gaze. Predictably, Seidl’s submerged critique will get less attention than the supposedly unwatchable subject: scandalized outcries seem inevitable, and distribution chances may be slim in the face of politically-correct hypocrisy about whether one should actually show the killing of animals—once again blaming the messenger for the message, as if the suppression of its depiction would eradicate the problem, when the opposite is true. Which proves along the way why the Seidl method still matters (and provokes), though it would seem overdue to simply discuss why he is an outstanding filmmaker, of which Safari once again provides ample proof.