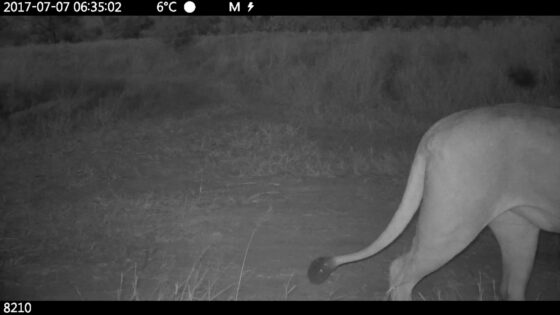 For Scotland’s pavilion at the Venice Biennale, Charlotte Prodger delivered the final installment in a trilogy of films begun with Stoneymollan Trail (2015) and her Turner Prize-winning BRIDGIT (2016). SaF05 is named after a maned lioness, a rare creature in Botswana that adopts typically male marking behaviours and sometimes mounts other females. For Prodger, the pursuit of this animal becomes a vehicle for exploring queer desire, (in)visibility, and the body’s relationships to space and technology. Shown at scheduled screening times in pristine projection conditions, SaF05 is significantly grander in scale and ambition than the artist’s previous films, while retaining, and even intensifying, the intimate heat that makes her work so engaging and seductive. In voiceover, Prodger offers vignettes of a personal history: praying to wake up as a boy, joining and leaving a Christian youth fellowship, sex, bereavement, a friend accidentally landing on an explicit photograph while looking at her phone. Those who appear in these narrative fragments are given names after the format of SaF05, such as BaF89, preserving a measure of anonymity. Prodger, too, evades capture in some sense, for despite the force of her presence on the soundtrack she remains mostly outside the frame, with traces of her body registering only through the closely held camera’s motion or as her feet jut into the image.

Moving across landscapes in Botswana, Greece, Scotland, and the US, SaF05 assembles an inventory of different forms of camera movement, including drone shots—a current favourite of many artists. Where some embrace drone cinematography without much reflection on what is at stake in this particular mode of visuality—detachment, mastery, militarism—true to the sophisticated investigation of picture-making that runs throughout her practice, Prodger makes the specificity of drone imaging a central part of SaF05. Her whispered instructions to the operator are audible, while the drone’s drone is taken up as a sonic motif that mutates across the soundtrack, to be voiced by bagpipes and saxophones. Joining the making of images to the making of the self, SaF05 concludes with the lioness still unseen; frustrating the panoptic gaze from above, she is an absent anchor, a powerful site of fantasy untamed by the real.