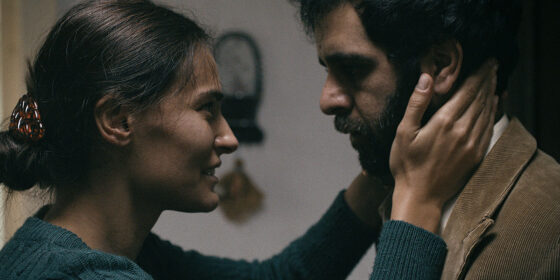 Ali Vatansever takes a stab at an Asghar Farhadi-style overdetermined drama about tired people in impossible situations with his second feature Saf. The film tells the two-part story of Kamil (Erol Afsin) and Remziye (Saadet Isil Aksoy), a working-class Turkish couple who struggle to live with dignity in the shadow of an insidious high-rise development project that threatens to squeeze struggling residents like them out of the neighbourhood. While Remziye frets about her dreams for the future and works as a maid for a wealthy family, Kamil finds himself a pariah as dire financial straits see him taking under-the-table night shifts as a bulldozer driver for the very development he’s spent the daytime hours resisting at community meetings, accepting the same pittance of a wage as the easily scapegoated Syrian refugee he replaced.

It’s tempting to read Kamil’s clumsy bulldozing as a metaphor for the film’s own fraught, ham-handed efforts to speak to the refugee crisis while struggling to think of anything for its Syrian characters to do besides look vulnerable and complicate the lives of the more fleshed-out leads. As melodrama-tinged social-realist riffs on the Job story go, Vatansever’s treatment of Kamil’s crises of conscience and finances feels real enough despite all of the clunky narrative machinations that move him from scene to scene. That’s largely thanks to Afsin’s eternally worried face—the stuff of good close-ups—which makes him seem authentically exhausted even when the script surrounds him with paper-thin foils at the job site, characters who only exist to point out the hypocrisy of working-class citizens who can’t see past their own light-skinned privilege to recognize refugees not as competition or interlopers but as kin. As for the film’s structural gambit of switching perspectives to view this quagmire through the eyes of Remziye, it’s another case of Vatanseyer’s attempts at humanism being hampered by his inability to fully imagine the inner lives of anyone other than Afsin, which makes you wonder why he didn’t just discard this structural apparatus and tell the story as a straight-out character study.