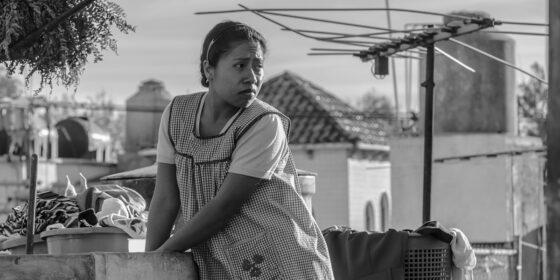 Roma opens and closes with the image of an airplane: at the beginning, it is reflected in the water being used to wash away dogshit from a driveway; in the end, it is simply observed crossing the sky. This image aptly bookends the film’s trajectory: at first the past is murkily reflected, but by the end a clarity of vision emerges. Set in Mexico City in 1970-71, Roma takes place primarily in the eponymous neighbourhood, where a middle-class family struggles to reinvent its identity after being abandoned by its patriarch. Like many of Alfonso Cuarón’s films, Roma focuses on women’s experiences and points of view; in this case, the film draws from the director’s own past, which may explain its immediacy and pathos.

The two women at the centre of the narrative are Cleo (Yalitza Aparicio), a maid and nanny of Mixteca heritage, and her employer Sofía (Marina de Tavira), a biologist and mother of four. Their relationship reveals the complex class structure of the time: Cleo cleans and serves, is yelled at and blamed, but also loved and supported by the family she works for. When she fears she is pregnant and is abandoned by her boyfriend Fermín, Sofía immediately takes Cleo under her wing.

While the film focuses on the personal dimension of the women’s stories, Cleo also serves as our witness to the conflicts and social upheavals of the times. The quiet, steady progress of the film is punctuated by devastating incidents and natural disasters: an earthquake, a forest fire, and a riot suddenly explode into Cleo’s consciousness, and even the thunderous roar of the ocean takes its toll. The riot that Cleo accidentally encounters is the Corpus Christi massacre, in which student demonstrators were attacked and killed by a paramilitary group which counts among its number Fermín, evolved from a lonely martial-arts aficionado into a hired thug. As in his 2006 Children of Men, Cuarón impeccably links the personal and the political into dense scenes that reproduce the sudden yet inexorable nature of trauma; through his use of plans-séquence, he interweaves the individual and the collective, the private and the public. Both films also make childbirth a central metaphor that reveals to us the resilience of women, who are able to create life in the midst of violence. Despite the tragedies they experience, the women in the family hold steady, choosing to move forward in the spirit of adventure rather than be swept away by loss.