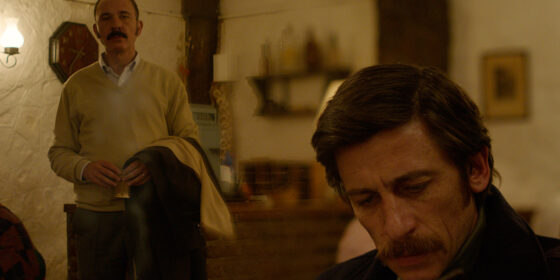 The De Palmia-ish split diopter shot in the opening sequence of Rojo is an allusion that also suggests its own distinctive usage. Positioning the camera just behind the balding pate of small-town lawyer Claudio (Dario Grandinetti), as he gazes angrily at a long-haired restaurant patron who’s taken his reservation, uncomfortably aligns us with an entitled, bourgeois worldview. It’s a perspective that Benjamin Naishtat’s Dirty War-era thriller occupies for its duration.

If Claudio’s evident impatience and frustration with the stranger who’s stolen his place at the table didn’t mark him as a complete asshole, his next actions go further: he re-encounters his rival on the way home and, after some awkward business with a revolver, carts the man’s not-quite-dead body out to the desert to rot. The suggestion that the outwardly upstanding Claudio is as apt to simply vanish his enemies as his government’s incipient military dictatorship is not subtle, but Rojo makes a good argument for the virtues of being direct. Naishtat’s excellent script balances some nicely Coens-esque narrative complications involving a colleague’s shady land deal against a social allegory that just keeps getting bleaker and widening in implication, with multiple visual and thematic variations on the idea of disappearance peaking in a two-bit magician’s creepy nightclub act. The sense of moral sleight-of-hand is so pervasive that by the time that Pablo Larraín alum Alfredo Castro shows up as a vain TV-celebrity detective who’s been hired to locate the missing man, we’re convinced he’ll bungle the case or be bumped off along the way. The actual outcome speaks to Naishtat’s resourcefulness as a storyteller; that his faux-Columbo fails to emerge as a hero cinches his film’s deep and all-too-recognizably realistic cynicism.