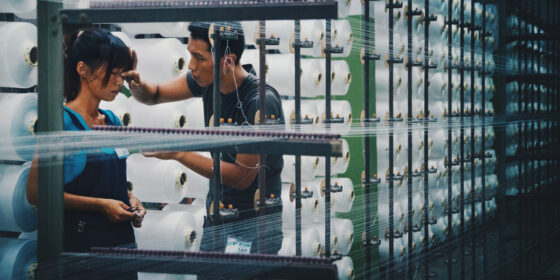 Like most things in The Road to Mandalay, the border crossing happens quietly: a small group assembles at a rural meeting point, a girl named Lianquing takes the front seat and the men the trunk, they drive through the night, a deal is made at the checkpoint, and by the next morning they’re in Bangkok. But this is merely the first gauntlet passed, as Midi Z’s fourth feature proceeds to follow this young Burmese woman’s efforts to get a foothold in the Thai capital, with the same sense of hush pervading the further stations along the way: lengthy, unadorned shots of job interviews, discussions of pay and work permits, menial tasks, phone calls home, police raids, and subsequent pay-offs. The immigrant experience thus emerges as a constant stream of unspectacular events where neither successes nor setbacks usher in proper change, even as the emotional toll of the latter echoes all the louder in the near silent surroundings.

When Lianquing follows her more or less accidental boyfriend Guo to a factory outside of the city, the tone begins to change as both form and content take on a greater urgency, with mixed results. The new setting certainly allows for striking images to be made, whether in the long tracking shot that shows the couple entering the factory floor for the first time, the cotton threads that seem to almost ensnare Lianquing, or a late scene that shows Guo venting his frustrations by manically feeding a furnace. Yet these images are also accompanied by a progressive shift toward relationship dynamics and subjectivity, which, for all its virtues, the serene objectivity of the opening half has neglected to properly set up. As the two modes continue to clash, The Road to Mandalay ultimately ends up marooned between its competing goals: it’s neither fully satisfying as a thwarted love story nor as a drama that highlights a specific reality, ending up instead as the oddly frustrating work of a director who clearly knows what he’s doing but not what he actually wants to do.