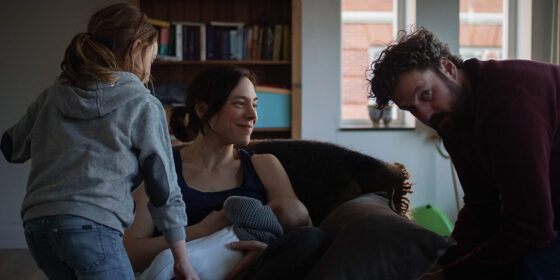 A fractured story structure mirroring the fractured memories of its main character is the gimmick in Dutch director Esther Rots’ second feature, arriving almost ten years after her feature debut Can Go Through Skin (2009). The film follows Mette (Circé Lethem), a social worker who specializes in supporting battered women, who gets too involved with a client’s case and as a result puts herself and her family in danger. Told in a series of flashbacks and -forwards, Retrospekt spirals through time leading up to the event that leaves Mette with serious mental and physical disabilities.

As a study in trauma, Retrospekt is unfortunately shallow, leaning too hard into its narrative conceit to carry the film to its predictable conclusion. I say predictable because it’s immediately apparent what has befallen Mette, but Rots teases out the final “revelation” in a way that makes it seem like it will be more surprising or illuminating than it actually turns out to be; there are several red-herring sequences of suggested escalating violence that ultimately cheapen the drama. As well, the film’s subtle insinuation of disability as some kind of punishment for Mette’s mistakes, whether or not it’s intended, nonetheless skirts the line into ableism. Worst of all, Retrospekt is scored by semi-operatic interludes narrating the thematic concerns of the film (in English). It’s supremely silly, and undercuts the otherwise ultra-serious tone.