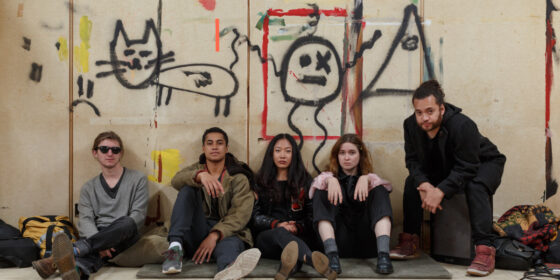 Based on Eleanor Catton’s acclaimed 2008 novel, The Rehearsal largely transpires under perpetually overcast Auckland skies or within sterile drama classrooms, in direct correlation with its story’s murkiness. First-year acting student Stanley (James Rolleston) is seen early on receiving a humiliating dressing-down from his teacher Hannah (Kerry Fox) for repeatedly offering a bloodless reading of a heated scene; from there on, he’s hungry for real-life Method fuel. He finds it when he begins a tentative romance with a local high school student, whose teenage sister recently made headlines for an affair with a tennis coach. “This first term is a physical and emotional undoing,” says Hannah to her students early on, and for Stanley it represents his moral undoing, as he uses the case as direct inspiration for his group’s end-of-year production.

Alison McLean’s return to feature filmmaking is a relatively straightforward take on the fragmented, polyphonic narrative of Catton’s novel (McLean’s last feature, the 1999 Jesus’ Son, was by comparison a faithfully freewheeling adaptation of Denis Johnson’s short-story collection of the same name). As result of this streamlining, there’s an inescapable sense that Stanley is only our nominal lead, though Rolleston’s transition from slack-jawed naïf to cunning exploiter is nicely played. Drably naturalistic and low-stakes throughout, the film is enlivened by an uncommon depiction of young people behaving and interacting in a believable manner, and confidently builds to a (literal) showstopper ending that’s both rousing and hard-won—enough to let one give the benefit of the doubt to the occasional shakiness that has preceded it.