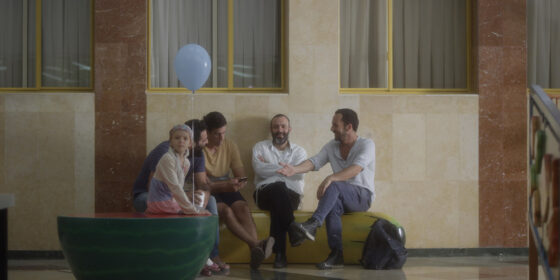 Or, Hey, I Know I’m Hassidic Now But Let’s Get the Band Back Together! A charming film that operates quite modestly despite the life-and-death stakes it depicts, Redemption is cinematic comfort food, reasonably predictable in its arc but acted and written well enough to prevent familiarity from lapsing into contempt. Menachem (Moshe Folkenflik) is a widower and single father who is a modern-day Job. Not long after losing his wife to cancer, he now faces the prospect of losing his six-year-old daughter Geula (Emily Granin) as well. Through it all, Menny remains devout, even though one can sense that his faith may be fraying at the edges.

Desperate for money to pay for an experimental treatment that may save Geula after chemo has failed, Menachem reaches out to his three friends from his younger, wilder, pre-Hassidic days. They used to be a band of some minor renown, The High Beams, with Menny as their frontman and chief songwriter. Now he wants them to play wedding gigs, trading on their old cachet of cool so they can make the money he needs for Geula’s care. But getting the boys back together—among them Menny’s non-religious brother Goolie (Yonatan Galila)—opens up old wounds and recriminations, along with new temptations for the now-devout Menachem.

Director Madmony (Restoration) and new partner Yacov stick pretty close to the road map here, but Redemption (which takes its name from the English translation of Geula’s name) is filled with small grace notes and undertones that set it apart from the usual fare. Menny’s Hassidic prohibition on touching women, for instance, leads to unexpected comedy when it comes to interacting with Geula’s young babysitter. But there are two key elements that set Redemption apart. One is the father-daughter relationship at its core: despite Geula’s illness taking much of their focus, the pair still have very ordinary interactions, during which the filmmakers remind us that parenting is difficult under any circumstances.

The other element of note is the music. Rather than going for the cheap gag of having geezers embarrass themselves by trying to recapture their glory days, Redemption has The High Beams rock out, even on Hebrew wedding traditionals. This is a wise choice, because it forces Menny to face what appears to be a very real choice: remain steadfast to God, or play gigs with the 78th best band in Tel Aviv?