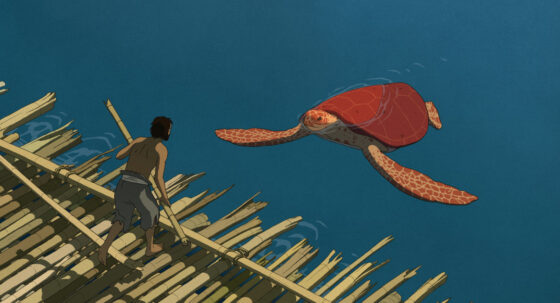 The iconic Studio Ghibli logo introduces Michael Dudok de Wit’s The Red Turtle, this year’s Un Certain Regard Jury prizewinner, and it’s easy enough to see why the storied animation studio would select the film as its first international co-production following the retirement of Miyazaki Hayao and the appointment of Suzuki Toshio as head of operations. The Dutch-born de Wit’s first feature shares a certain aesthetic sensibility with Ghibli’s vaunted catalogue––its animation not hand-drawn, but approximating that same look and feel––as well as a pronounced ecological sympathy that at a glance might appear to align it favorably with Princess Mononoke (1997) or Tales from Earthsea (2006). Unfortunately, de Wit doubles down on the earthly delights and tills the topsoil with impressionistic, quasi-mystical signifiers, rendering the experience less an amorous daydream than a kind of New-Age hallucination.

Written by de Wit in collaboration with French director Pascale Ferran (whose far superior Bird People [2014] touches on similar themes of communication and preordained romance), the film proceeds wordlessly, propelled along instead via luxuriant visuals and a celestial score determined to fill in whatever emotional crevices the imagery fails to articulate. The plot, as thin as it is––concerning a castaway man on a deserted island whose encounter with a curious crimson sea turtle begets the arrival of a virginal bride and, soon enough, a newborn son––provides a suitable enough base for the film’s more existential concerns. But rather than communicate anything substantial, each successive development registers as one more step toward an epiphany that evaporates in tandem with the moony-eyed materialization of the film’s ethno-spiritual utopia. With nary a word, The Red Turtle manages to speak in lofty, unconvincing tones.