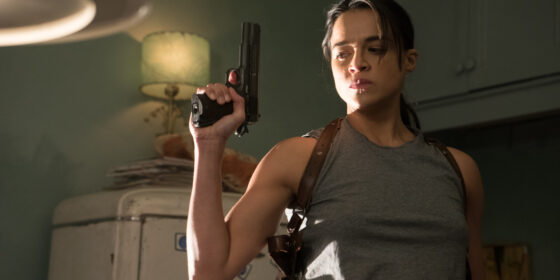 A potential powder keg of (trans)gender politics provided anybody ever actually sees it after its TIFF premiere, Walter Hill’s (Re)Assignment is sort of two movies in one: a low-rent, bullet-in-the-head revenge thriller that embraces clichés like long-lost friends, and an inconngrously high-minded disquisition on style that cribs from Shakespeare and Poe en route to the conclusion that politics and morality have no place in a work of art. The latter position is articulated by Sigourney Weaver, as a surgeon stitched together out of parts of Drs. Frankenstein, Lecter, No and Giggles (who, in a thematically appropriate coincidence, looks a bit like the late Michael Cimino), whose handiwork sets the thriller plot in motion: her master plan is to emasculate the assassin who killed her brother by forcing him to live the rest of his life in a woman’s body. Suffice it to say that the question of gender reassignment as 1) a mordant form of punishment and 2) a crucible for personal change is a loaded and leading one, and the surface preposterousness of Hill’s film—starting with Michelle Rodriguez in a wispy beard as the pre-op hitman—won’t do much to mollify critics, who have ideological and aesthetic lines of attack available on nearly every single aspect of the film. And yet, following the logic of Weaver’s hilariously self-satisfied puppet-master operating-room auteur (an amazing piece of casting yielding the most entertaining performance at the festival), (Re)Assignment is only truly answerable to the person who made it. Judging by the last shot, it’s hard to say if even Walter Hill thinks this cheapo co-production, set in San Francisco but clearly shot in Vancouver, is a good film, but the surprising pathos and potency of that final image doesn’t come out of nowhere, either. Those sympathetic to the idea that fiascos gently age into masterpieces may return this one after a safe interval has passed—or not.