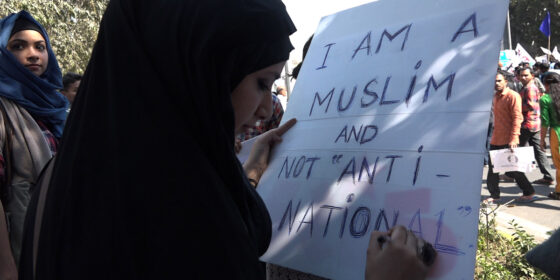 Every TIFF features at least one epic-length historical documentary whose subject matter is way too depressing to penetrate the fog of cinephile and awards-season discussions encircling the neighbouring Town Crier, but kicks around in the back of the mind as probably advisable viewing anyway. Once I realized it was on the lineup, I had to watch Anand Patwardhan’s eight-part Reason in two sittings in reverse order, like an idiot, but it was the best (read: only) way to accommodate a fast-mutating festival schedule. And Reason was more than worth it. The film tells a story unique to the bloody postcolonial history of India, yet is also consistent with the revanchist populism roiling all corners of the supposedly democratized world today. Starting from Gandhi’s assassination in 1948, Patwardhan traces the consolidation of power by Hindu nationalists in India over the seven decades since independence, including within Prime Minister Narendra Modi’s own Bharatiya Janata Party (BJP). Patwardhan’s true subject is the hypocritical failure of the government to suppress Islamophobia and caste discrimination despite India being “the biggest democracy in the world,” wherein the reselling of neoliberal values emboldens hate groups like Sanathan Sanstha, whose members are blamed for the murders of anti-caste activists Narendra Dabholkar (in 2013) and Govind Pansare (in 2015.)

Reason is not an easy film to spend 261 minutes with: it’s less high-concept than Patwardhan’s 1994 documentary Father, Son and Holy War, which traced traditionalist misogyny in relation to the tropes of TV, movies, advertising, and radio, along with the steroidal growth of the Indian military apparatus. Then and now, the filmmaker is fascinated by the conflation of ancient symbols with contemporary struggles: “saffron” nationalists position themselves as descendants of the country’s very first inhabitants, and therefore superior to Muslims, or the untouchable Dalits. Patwardhan spends considerable time on the case of Rohith Chakravarti Vemula, a Dalit PhD student at Hyderabad University who was driven to suicide in by the school’s bigoted administration (and, in his martyrdom, became a rallying figure for anti-caste rationalists in the spirit of Dabholkar and Pansare.) Patwardhan’s footage of young men belonging to the far-right student group ABVP is terrorizing for its hollering portrayal of cognitive dissonance made physical. Reason clocks the galvanizing of socialist and anti-bigotry activist groups, but only in relation to the uptick in anti-Muslim and anti-Dalit scapegoating, riots and murder.

Countless scenes see anti-caste activists brandishing signs like “I AM A MUSLIM AND NOT ANTI-NATIONAL.” Not unlike white nationalism in North America, the use of terms like “anti-national” and “casteist” somehow refract victimhood back onto the nativists of the BJP and ABVP, whose politics unfold from a “claim” to their role in society. Patwardhan’s bitterly ruminative voiceover expresses regret over popular masses who allow themselves to be simultaneously dumbed down and weaponized in the name of the gods against enemies who never existed in the first place. (There’s a tangent about the polymers used to create statues of Vishnu and Ganesha creating toxic reactions after exposure, a micro-metaphor for blind faith that would be too much if it weren’t real.) A whole separate film could be made about the rise of Modi, who once called a refugee camp hosting 200,000 Muslim Indians whose homes had been trampled in preventable riots a “babymaking factory,” but Patwardhan mostly keeps the PM in the background as a hovering symbol of the new normal, often depicted in crude digital effigies. All told, Reason is a potent dossier, demonstrating a uniquely contemporary strain of fake-news scapegoating: beyond the names and stories excluded from India’s broader success story, it reveals abundant evidence of an excruciatingly riven society.