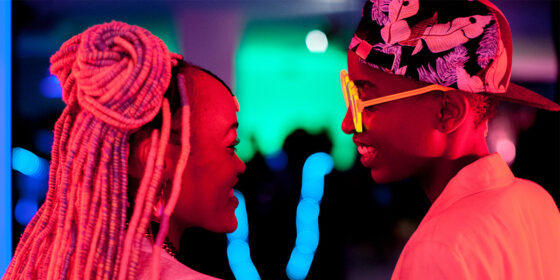 Firsts are almost always in some measure definitive. To be the first Kenyan film to ever premiere at Cannes, as Wanuri Kahiu’s newest feature film Rafiki was, is to be placed under an incredible weight of expectation. To be banned in your home country due to a supposed “intent to promote lesbianism” is to be placed under an additional weight of scandal. And yet Kahiu has crafted a film which is both potent and modest in its navigation of queered coming-of-age territory. Detractors of Rafiki are quick to point out that the film’s structure and narrative are quite conventional, but there is no re-treading of a familiar geography for this film: Rafiki is quite literally the first of its kind to exist on this part of the map. An African queer love story will never be derivative of a Western one, no matter how typical its formal strategies.

Six years in the making, Rafiki traces with empathy and a rare tenderness the beginnings of a relationship between two young women, Kena (Samantha Mugatsia) and Ziki (Sheila Munyiva), the daughters of their neighbourhood’s two political foes. Kahiu effectively taps into the emotional potential of young queer love, capturing moments so true to experience as to transcend story altogether. Her empathic eye finds a taut balance between the affective tone of young queer feeling and the necessary witness the film must bear to the reality of being queer women in conservative Kenya. This element indeed speaks such truth to power that it compensates more than enough for any of the film’s more conventional gestures. Alongside her directorial pursuits, Kahiu is the co-founder of AFROBUBBLEGUM, a media company which seeks to promote “Fun, fierce and frivolous African art.” It is fitting then that, with Rafiki, the director has produced a wholly new vision of African filmmaking that is vibrant, compassionate, and joyous.