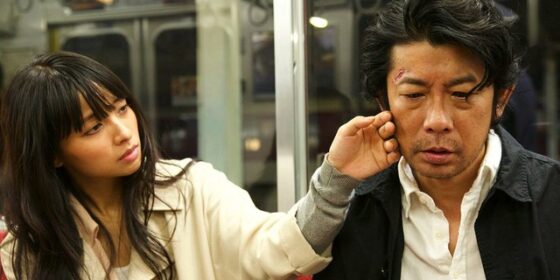 This past weekend the international film community was rocked by the news that Juliette Binoche is set to star in Cannes darling Naomi Kawase’s next film, a Japan-set movie that will reportedly be called Vision. Aside from reporting the casting coup, this news is surprising because it suggests that Kawase, who is now entering her third decade as a major presence on the French festival circuit, believes she still has more to say about, well, vision—a theme she has just tackled head-on with her kitschy, sincere, and sometimes sincerely pretty new film, Radiance.

Coffee-drunk, both eyes still crusted with sleep, I encountered Radiance in perhaps less-than-ideal conditions: 8:30 ante meridiem, seventh morning of the Festival de Cannes, unable to fight off the periodic doze. But then again, perhaps not. Schematically concerned with the relationship that develops between a photographer who can barely see and a woman who writes film captions for the hearing impaired, this is a film I found myself watching (first unwilfully, then by choice) with my eyes closed—catching mostly half-glimpsed peach-pink sunsets, colliding faces aching to smudge into one other, and snatches of conversations about the nature of light and photography—which seemed not only appropriate, but also weirdly poetic. Very little of what I heard and saw seemed profound, but then I also think the movie knew that. Coming from a filmmaker who gets more than her share of flack when she makes a less-than-quality movie, Radiance is above all—if I interpreted the fragments I gathered correctly—a movie about her desire for encounters (with people, with cinema) that are sensorial and true. As a work of art it’s hardly essential, but the objectives are noble enough. There are worse movies that one can sleep through.