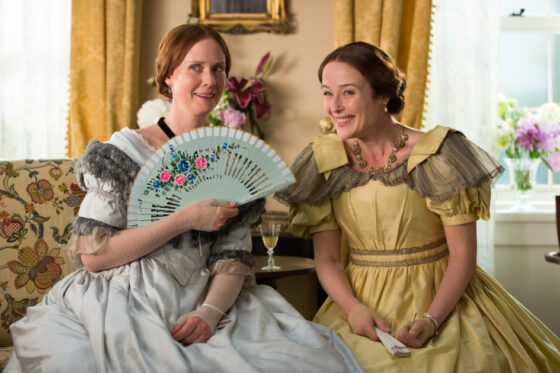 Some have called Terence Davies’ second (and better) film to be unveiled in the last 12 months the best Whit Stillman film of the year—the gleeful indulgence in the sound of the English language matches and arguably surpassed that on display in Stillman’s Love & Friendship—while others have proclaimed it the best Dreyer film in 52. Both parties make valid points, but such comparisons might suggest this film to be a far more mannered (not to mention dry-er) affair than it actually is. In fact, this unlikely biopic detailing the chaste life of American poet Emily Dickinson is as fresh and queer as any new film to be released this year (or, for the sake of hyperbole, in the last 52).

It’s somewhere around the picture’s 20-minute mark, when a photographer’s portrait session prompts a series of digital, slow-motion time-is-passing animations in which all of the film’s major subjects age, uncannily, before our eyes, that Davies’ latest reveals itself as something out of the ordinary—then later, in the midst of an extended slideshow chronicling the Battle of Gettysburg in hyperreal colourized snapshots, as something perhaps extra-ordinary. But it’s only in the home stretch, when all of the spirited badinage begins to transition into disconsolate sorrow and bitterness, the verses have retired, that its veneer of joy over a woman’s life lived fades to divulge the contempt in all those piercing gazes that lent its atmosphere so much vivacity—when all that palpable satisfaction that was evident in virtually every exchange can suddenly be understood as the wrath that only a loving individual can express for those she loves deeply. “How can you go on loving me when I don’t deserve it?” “Because you are so easy to love.” It’s apparently becoming de rigueur to end a film against the gloomy strings of Charles Ives’ “The Unanswered Question”; this may the first one to fully earn such a cue.