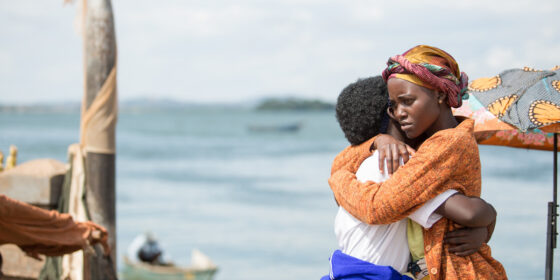 Disney’s second African movie of the year since The Jungle Book is set in India, Queen of Katwe is deep-dish Disney of the live-action variety, the kind that parents take their kids to to make them better and make themselves as parents feel better. Director Mira Nair, operating far from her Indian base, doesn’t know from irony and seems to like making essentially storybook movies that manipulate family drama with comedic touches for the maximally uplifting third act. She is, in effect, the perfect Disney director.  The irresistible ringer for gullible audiences is that the movie is based on a true story.

Phiona (Madina Nalwanga), a lowly girl  in the Kampala, Uganda shantytown known as Katwe, is taken under the wing of a kindly chess coach (David Oyelowo) at a local ministry. There, he discovers that Phiona is a natural chess prodigy, even though she can’t read and has no real schooling, working her days selling corn for her hard-labouring mom (Lupita Nyong’o). From here, it’s nowhere but up as Phiona defies the odds and becomes Uganda’s national chess champion.

William Wheeler, who wrote the not very good The Reluctant Fundamentalist (2012), also directed by Nair, crafts his script in the belief that there must be a new obstacle introduced every five minutes. If there’s not a terrible street accident that wreaks havoc on Phiona’s desperate household, then a flood or disastrous chess tournament in Moscow will do. The formula is rigidly applied, which is why Queen of Katwe plays more like an instructional manual on self-determination than anything like a movie with a breathing, organic story. The actors, especially Nyong’o, seem to get into it, though it may also just be the excitement of knowing that they’re in an actual Walt Disney movie.