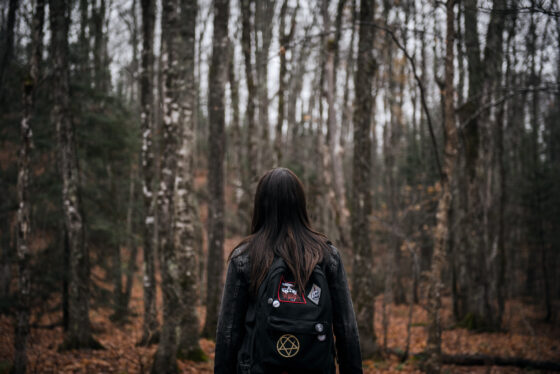 The hands-down winner of the TIFF 2017 “Google the title to understand it” award, Pyewacket finds Adam MacDonald—who came to the festival in 2014 with a tough, impressive little thriller called Backcountry—swapping generic models, trading survivalist realism for occult-tinged horror. It’s a lateral move, and also not an improvement (albeit one that’s secured him a top-tier distributor).

Leah (Nicole Munoz) is a small-town teenage Goth whose fixation on the dark arts is partly a reaction to the (it’s implied accidental) death of her father and its ruinous effect on her mother (Laurie Holden). Mom’s response to tragedy is to uproot her daughter from her social circle and school and move to a creepy old house in the country—an exile that drives Leah to consult her vast collection of leather-bound books as a means of taking revenge. After locating a spell with appropriately devastating consequences, she matter-of-factly casts it and is suddenly gripped with panic that that old black magic might just work.

The subtext is as old as Carrie (or maybe the Salem Witch Trials): the demonic energy of adolescence, harnessed against an older generation that seeks to repress it.  MacDonald is trying to be a filmmaker of ideas here (as opposed to in Backcountry, which worked purely viscerally), but the metaphor doesn’t develop or deepen as the film goes on. Instead, it just sits there, heavy and inert, while the camera creeps through the woods Evil Dead-style and the actors try their best to drag the action over the top. It duly gets there, and it’s at this point that Pyewacket becomes more or less indistinguishable from the mass-market dross its talented maker would surely (or hopefully) like to transcend.