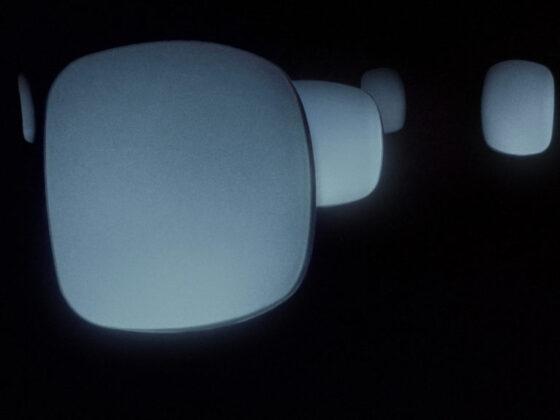 Early in the autumn of 1900, four months before Edison closed the Black Maria and five years before the Lumière brothers left the cinematograph business altogether for what they supposed to be less trivial concerns, a storm landed at the booming port town of Galveston, Texas and killed perhaps as many as 10,000 people, in what remains the worst natural disaster to befall the United States. There is probably no historical relation between this storm and these events marking the end of the beginning of film, of what we might call proto-cinema; PROTOTYPE, the first feature by Blake Williams, proposes, among many other things and with minimal recourse to language, an arrangement of history in which they may ultimately be related.

After a half-decade spent mapping the formal possibilities of anaglyph 3D, Williams (a regular contributor to these pages) has now turned to the more commercially common polarized format. Where the anaglyph films worked as often as not against temptations of depth, rerouting illusion toward flat splits of vision dizzyingly piled, PROTOTYPE is less directly confrontational with its viewer’s gaze (or at least seems so to my own less than perfect eyes). The film opens with a sequence of still photographs, stereoscopic images depicting Galveston before and after the storm’s landing on September 8th. As rendered here, the illusion is significant, and Williams offers enough time with each image to allow one’s eyes to acclimate, to wander as they will. Following the final still—a lighthouse, its beam searching—the film cuts to the first of its two intertitles, which contains only the date “Sept. 7, 1900,” before beginning a minute-long tour of spaces outside and within a farmhouse. These images, shot with a fixed frame and in sumptuously saturated colour, are of such stillness that were it not for a horse’s grazing, they might be mistaken for a continuation of the opening. The decisive break with this prologue comes via a hard cut to a darkened space containing five monitors humming blankly with visual noise, three of which are arrayed diagonally in depth, the others marking out the vertical edges of the frame.

It would take considerably more words than the current capsule allows—perhaps more than all of this year’s hundreds of brief reviews put together—to adequately account for what comes to fill these expectant frames over the following 55 minutes. Ranging historically from scientific images recalling the studies of Muybridge to the high gloss of capital’s preening at a modern auto trade show, the bulk of the work done by the infernal machine which is PROTOTYPE’s subject and, in a sense, the film itself, is given over to a tour through a condensed history of images bearing some connection to the avant-garde, those historical moments in which the production of images became only an art, rather than any of the things it was before. The role of the Galveston storm, intimately related to this machine as both its form and its force, might then be understood on at least three levels: autobiographically, as the event which led to the expansion of Houston, Williams’ hometown, into the sprawl it is today (autobiographical images, of course, having proved of tremendous importance to the films of the New American Cinema); metaphorically, as the storm from Walter Benjamin’s “Theses,” the damned progress which blows history into the future; and literally, as a prototype of the events to come in the ecological catastrophe looming large on every horizon. (Houston now sits under the waters of its third “100 year flood” of the decade).

As Williams’ images descend into abstractions induced by collapsing distances, the camera drawing so near as to render previously seen images as pure graphic plays of light and dark, the tension in all three of these levels between the rational and irrational surfaces as the film’s theme. Finally the storm subsides, the machine breaks down, and we are left on the beach, once again in the rich color of late Godard where before there was only grisaille. A sailboat moves slowly by. Clouds are seen from above, unconvincing in their calmness. A lone bird sits on stone steps to nowhere, watching the waves come in.