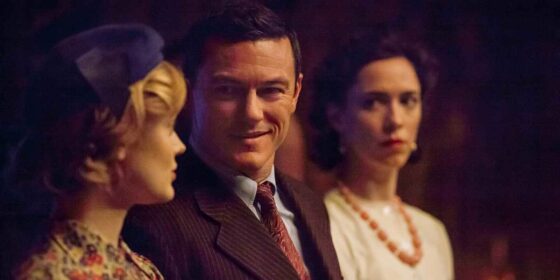 Angela Robinson’s biopic of the creators of Wonder Woman makes an intriguing companion piece to the DC blockbuster released earlier this year—which presented a more commercial and sanitised version of the heroine—and is an odd yet enjoyable film on its own. Framed by Professor William Marston’s (Luke Evans) defense of the morals of his comic-book creation to Josette Frank (Connie Britton), director of the Child Study Association of America, the film goes on to focus on three central characters: Marston, his wife and colleague Elizabeth (Rebecca Hall), and their new mutual creative and romantic partner, young student Olive Byrne (Bella Heathcote). This narrative device cleverly draws a direct line between the characters’ personal lives and their professional ventures: the film illustrates how several major inspirations for the Wonder Woman series arose from Byrne and the Martsons’ intertwined stories of sexual and moral liberation.

From the team’s first collaboration (which ends up creating the lie detector, a suggestive detail in a movie about concealed desires) to the Marstons’ later incarnations as conventional parents, creativity is portrayed as the exciting and difficult meeting of wildly different personalities, to which Robinson (who previously made her own venture into the superhero genre with her 2004 spoof D.E.B.S.) gives plenty of space. As a result, the trio’s thoroughly modern attitudes appear natural rather than arrogant—or, as is the case in many period pieces, as if they had been applied in anachronistic hindsight by the filmmakers. Their conversations about the intersections between psychology and bondage fetishism are treated seriously, yet play as lighthearted thanks to Robinson’s straightforward yet considerate direction and the fine performances of the leads, amongst whom Hall shines particularly bright: at once fearful of other people’s judgement yet determined to live freely, her Elizabeth has the most to overcome, and the actress makes the character’s challenges vibrant when they could have been reduced to token plot points.