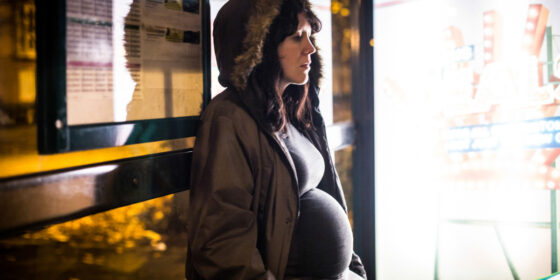 In Ben Wheatley’s Sightseers (2012), Alice Lowe created a role and gave a brilliant performance as a woman slowly but enthusiastically embracing her own latent psychosis – going crazy as a state of grace. Her feature directorial debut Prevenge mines similar territory with less robust but still relatively healthy returns. Lowe’s thing is gorily mordant humour, and she shows her hand in the very first scene, where her character Ruth seduces and then serrates a piggish pet-shop employee put off his guard by his customer’s jutting, preggers belly. The film’s one joke is the incongruous contrast between its anti-heroine’s bun-in-the-oven life force (the film was shot while Lowe was seven months pregnant with her daughter) and her relentlessly murderous mission, which has such an over-deliberate retrospective justification that it could be a goof on the whole vengeance-is-mine sub-genre. The name of the game here is provocation, and if the script’s conflation of delicate conditions is never quite as outrageous or unsettling as its creator intends, Prevenge is still filled with moments that show Lowe’s skill as a director (including some effectively startling quick-cut imagery); and as an actress, she’s her own best creative collaborator, which is appropriate for a film that dabbles in schizophrenic subtext. Ruth’s venomous interior monologues really seem to be coming off the top of her head, via her uterus; even when it’s twisted into a reedy baby-doll drone, Lowe’s voice comes through loud and clear.