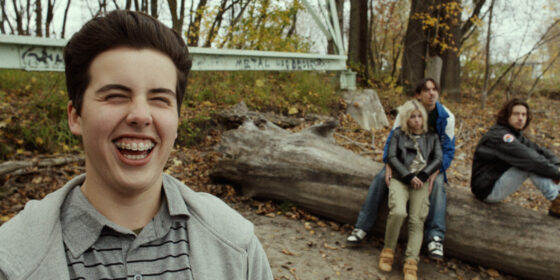 There’s a self-reflexive moment in Vincent Biron’s feature debut where a group of delinquents watch Béla Tarr’s The Turin Horse (2011) stoned in a backyard. It’s an odd cinephilic reference point for a film that is ostensibly the bastard child of Harmony Korine’s Trash Humpers (2009) and Todd Solondz’s Welcome to the Dollhouse (1995), and it signals either that Biron aspires to the Hungarian miserabilist’s nihilism or sees Tarr’s work as nothing more than a self-indulgent stunt.

The closest thing that Prank has to a plot centres on Stefie (Étienne Galloy), who is introduced to the gang while aimlessly bouncing a ball against a cinderblock wall. Unfulfilled by his cacophonous clarinet playing, Stefie finds purpose and one-way friendships as the group pulls unoriginal stunts that include, but are not limited to, hanging a $20 bill from a fishing line, defecating on cars, and scaring people by popping out of recycling bins. Despite keeping its scope narrow and excluding the private lives of these characters, the performances, especially by Galloy, evoke something deeper. By doing this, Biron invites sympathy for these listless young people before revealing them to be in service of a cruel, pointless punchline. The film, very deliberately, is itself a prank.