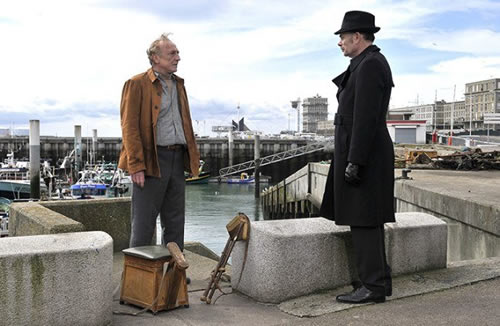 Can there be such a thing as a productive political fantasy? This is far from a rhetorical question, and as I revisit Aki Kaurismäki’s latest film, which is without a doubt a political film for our times, I find myself grappling with this very question. This is because the idea of what constitutes “political representation” shifted, I believe, since Kaurismäki began making films in his proletarian-modernist style—a fact of which the Finnish master is very much aware. I actually suspect that the terms of the political, and what it means to represent it, locate it, assign it agency, have quite possibly changed in a significant way, from the moment in May when Le Havre had its world premiere at Cannes, and now, six months later, as it enters commercial release. To put it another way: does Kaurismäki’s fantastical optimism appear hopelessly naïve as the Occupy movement trudges on, in the face of tear gas and rubber bullets? What exactly would a properly activist film even look like right now? To begin to answer this question, and assess Kaurismäki’s place within any tentative web of solutions, we must work backwards, to understand what Le Havre is and where it comes from.

In a certain sense, there has been, at best, a pluralistic exploration, and at worst a crisis, in the very concept of “political cinema” since the general decay of the various international New Wave cinemas of the 1960s and ‘70s. D. N. Rodowick referred to this as “the crisis of political modernism” (typified, in some senses, by Straub-Huillet, Oshima, and mid-period Godard), the increasing uncertainty that stringent form and radical content would necessarily serve to mutually reinforce one another, or more to the point, that a sturdy recipe for cinematic radicalism, regardless of social or historical context, had been achieved. In a manner of speaking, the “last man standing” from this wreckage was Fassbinder, who, by channeling his leftism through Sirkian affect, found a way forward, even when certain of the far-left pieties that the political modernists held dear were undermined, if temporarily, by terrorist excess. The ur-text for this crisis of conscience is undoubtedly Fassbinder’s contribution to the 1978 omnibus Germany in Autumn, in which the news of German special forces storming the hijacked Lufthansa flight in Mogadishu induced panic in the filmmaker that all individuals with leftist ties would soon be rounded up indiscriminately. Meanwhile, his elderly mother prattles on about the need for a new, benevolent Führer.

If there is one dominant spirit presiding over Kaurismäki’s work it’s probably Fassbinder, although it’s not always readily apparent. Aki’s love for rockabilly, film noir, and the rebel streak in classic Hollywood (Nick Ray, Sam Fuller) makes him a much more obvious kinsman of Wim Wenders. But what Kaurismäki has consistently drawn from Fassbinder, in terms of a refined formalist politic, is a way of organizing and specularizing space, of rendering power visible on the interpersonal and the “street” level—that zone that Michel de Certeau designates as the place of small “tactics” rather than grand “strategies.” Kaurismäki’s shots frame characters and their environments with a highly sophisticated simplicity, pinning them down within a geographically defined “social gest” but at the same time delineating a persistently palpable three dimensions around them. What’s more, in his editing schemes, Aki continues this delineated space as socially defined, as a network of looks and gazes, of suspicions, solicitations and entreaties. His still frames verge on portraiture, but it is always a mode of depiction activated by the social contract.

In fact, this may be why for some a film like Le Havre, and a project like Kaurismäki’s, may have lost some legitimacy. Is this contract irretrievably ruptured? It is not always readily apparent that Kaurismäki is a political filmmaker, and this is because a number of his films are so doggedly minor (the Leningrad Cowboys films, for example, or Jarmuschian larks like I Hired a Contract Killer [1990]). But these films share with the more obviously “engaged” efforts—the Proletarian Trilogy, The Man Without a Past (2002), and Le Havre—an overriding faith in conviviality and basic decency. Fassbinder may be an inescapable formal influence, but in terms of tone and approach, Kaurismäki shares a great deal with French-Georgian master Otar Iosseliani. Though Aki’s sense of humour is drier and he lacks Iosseliani’s ostentatious whimsy, what clearly unites the two filmmakers is alcohol as the great leveler, a firm commitment that most any conflict can eventually be hashed out over a good drink.

But Iosseliani’s “politics,” if we want to stretch the word that far, are bourgeois at best; a film like Gardens in Autumn (2006) is virtually the obverse of Le Havre, showing the enduring values of Parisian culture being despoiled by a wave of clueless African immigrants. By contrast, what Kaurismäki’s films have consistently retained is a radical openness, conveyed through their formal organization. The wanderers and outcasts who populate Aki’s films generate their filmic space, and by extension, any sociopolitical orientation implied therein: a community, a society, or a country. Individual by individual, encounter by encounter and shot by shot, Kaurismäki’s films depict the renegotiation of the social contract; they may be downbeat or forlorn, as with his masterwork Drifting Clouds (1996), but they are never less than utopian.

But if this prospect fails to persuade, which it inevitably does for some, it is precisely because Aki, like a rotgut Habermas, refuses to relinquish the modernist project, in art or in society. The current protests, whose efficacy has yet to be determined, are operating on a different set of assumptions. Neo-liberal economics has in essence dissolved the nation-state as a meaningful site of concentrated action. That an individual within a state apparatus could go rogue and disrupt the system with an unabashedly anarchistic act, as Det. Monet (Jean-Pierre Darroussin) does near the end of Le Havre, in letting Idrissa (Blondin Miguel), the young illegal immigrant, stow away to London to meet his mother, is more than just unlikely; it’s a liberal bromide that is essentially beside the point. The small act leaves the broader system of oppression in place, while providing an exception that exculpates the typical exercise of force.

But I would contend that this is a fundamental misunderstanding of Kaurismäki’s ethics of the “small act,” of those Certeauean tactics that negotiate and thwart oppression without charging directly into its barricades. And this is, in essence, Aki’s answer to that old crisis of political modernism from decades past. For one thing, the questions of top-down or bottom-up political action, those that preoccupy movements from the Red Army Faction on through to the Occupiers, rely on the vertical model that comes with an existence at least partially stationed within a nation or a homeland, usually one within the power base. By contrast, immigration, particularly of the undocumented sort, is a lateral affair. It is about moving from shadow to shadow, or hiding in plain sight, but nevertheless organizing multiple moves across. And as such, it is also about forging alliances across, sussing out and tapping into networks both fleeting and semi-permanent. This is a spatial process, and it is also one of attempted legibility. It is not a set of moves within and against the system writ large; it zeroes in on individuals, frames them, looks into their eyes, forges space and community with them, in neighborhoods, through moments. Marcel Marx (André Wilms), by finding himself in the position to help Idrissa, and doing so reflexively, forges a utopian space. If Kaurismäki’s vision of camaraderie among the oppressed in Le Havre fails to ring true, it could be because thus far we’ve been fortunate enough never to find ourselves among their ranks.