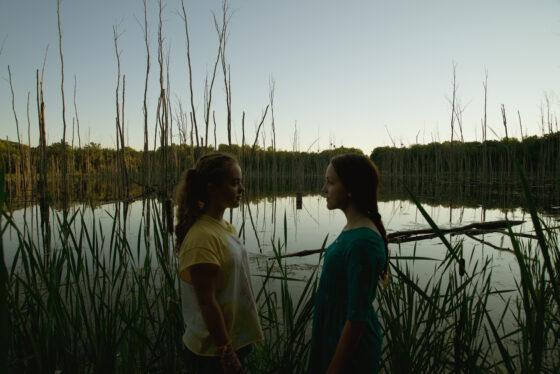 Micro-budget Toronto filmmaker turned production maven Ingrid Veninger hits her sweet spot with Porcupine Lake, which trades some of her scrappier aesthetic instincts for a more polished veneer but keeps the heart and prickly specificity of her best work. Like Andrew Cividino’s recent Canadian indie darling Sleeping Giant, which staged its small-scale drama of teens on the cusp of adulthood and male aggression against the sublime physical features of Thunder Bay, Porcupine Lake uses Georgian Bay as a varied environmental stage for the halting summer transformation of Bea (Charlotte Salisbury), a shy Toronto export spending some time in cottage country as her parents figure out what to do with their strained marriage and the family diner. Despite the structural kinship with Giant, Veninger’s film is its own thing, open to the strange and capricious desires of adolescents and non-judgmental about the important (if sometimes toxic) relationships they forge.

If the broad outline of this story is familiar, the details of Bea’s summer maybe-friendship, maybe-more with local Kate (Lucinda Armstrong Hall) are refreshingly idiosyncratic. Kate is a bracing girl, her runt-of-the-litter status at home seemingly compelling her to aggressively take the driver’s seat with her new cosmopolitan friend, whose waif-like beauty belies an inner grit Kate never quite wants to see for what it is. There’s real dramatic tension and a bit of danger in how Bea responds to Kate’s provocations, sensual or otherwise. It’s a testament to her perceptiveness about the complicated lives of young women that Veninger allows this dynamic to stay charged and peculiar to itself right to the end without making any grand, universal statements about the nature of adolescent girls’ friendships, and the way the creeping possibility of queer affections might torque them in a different direction. Amidst the more refined naturalistic photography and tighter-than-usual plotting, it’s this emotional acuity that makes Porcupine Lake instantly recognizable as Veninger’s work.