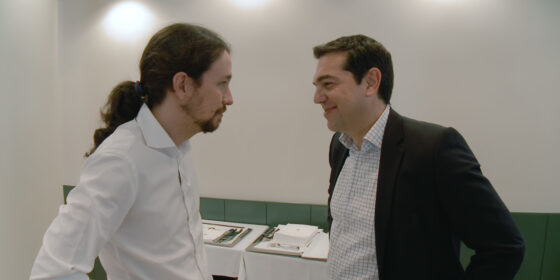 If one major lesson can be drawn (as opposed to countless small and terrifying ones) from the last few years of populist upsurges, maybe it’s this: a consistent, well-sold policy—whether Bernie Sanders’ or Nigel Farage’s—can still resonate with dissatisfied voter blocs in a major way, wild-carding the amnesiac Central Casting burlesque that tends to be electoral politics in the quote-unquote Western World. Slick and meticulous, Fernando León de Aranoa’s Politics, Instruction Manual tracks the inside machinations of Spain’s Podemos party, an outgrowth of the anti-austerity 15th of May movement led by the ponytailed dynamo Pablo Iglesias, which was absorbed into the political process after a (mostly compensatory) challenge from the government establishment. De Aranoa largely avoids the low-hanging fruit of demonizing Podemos’ right-wing opponents; the endeavour to transmogrify a groundswell of grassroots support into a viable, competitive platform leavens the film with enough paranoid tension for one campaign.

Admittedly, two hours of hard political theory straight to the dome is not every moviegoer’s catnip; with its clean-limned establishing shots and cell-phone panoramas of crowds cheering “si, se puede,” de Aranoa’s film errs at times on the side of resembling a promo video, albeit one too dense to stand a shot at going viral. Long before Podemos’ breakthrough on December 20, 2015, wherein the party won 69 seats in Spain’s new Parliament, de Aranoa forfeits any projections of “objectivity”; what remains for the ages is a sprawling, optimistic, ultimately nerve-wracking study of, at once, a new political process and the damnable protoplasm of long-haul democracy. Until the national elections (and, one has to assume, long since after), Podemos’ victories are not battles won so much as compromises staved off—best illustrated when Iglesias has cause to tell de Aranoa that “Certain left-wing politics want to exist, not win.”