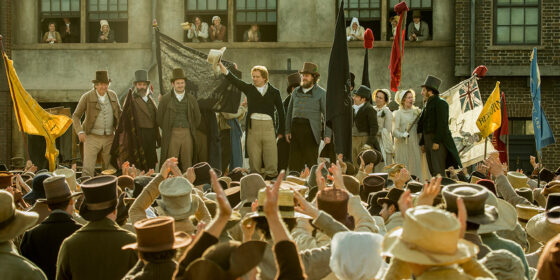 Make no mistake about it: Peterloo, the new movie directed by Mike Leigh, is one weird piece of work. Seemingly created outside of time and space, with no relation to either anything else Leigh has directed nor anything else in contemporary cinema (except for Dick Pope’s ultra HD digital cinematography, which often mimics Vermeer’s lighting and composition), and written as if the intended audience was middle-school students taking a British history class, this excruciatingly dull two hours-plus exercise is, well, Leigh’s personal Waterloo.

That’s where the movie begins, in 1815, with a confused British bugler stumbling around the smoky battlefield, lending the false impression that he’s on the losing side. A creaky montage links the bugler returning home to Manchester with the early wave of an endless series of lengthy discussions and debates that fill up 90% of the running time, from parliamentary proclamations and votes to secret meetings amongst Manchester radicals pushing for political reforms. Leigh takes a soupcon of irony from the radicals’ call for “one man, one vote” while depicting women’s gatherings supporting their men; universal male suffrage is one thing, but universal suffrage is, for this moment, a bridge too far.

The most charitable comment that can be made about Peterloo is that it painstakingly takes the viewer through a procedural narrative of each and every episode, event and, God knows, meeting (and meetings about meetings) leading up to the August 16, 1819 cataclysm on Manchester’s St. Peter’s Field, where a pro-radicals crowd (estimated at between 60–80,000, but which looks like here to be about 2,000) was massacred by saber-wielding British troops, under the orders of an odious cabal of lackeys to King George III. This sounds moderately interesting, though if it sounds suspiciously like Ken Loach at his on-the-nose worst in costume, you’d be on the mark. Whatever you think of Leigh as a filmmaker, he’s always had a way with actors, but what’s perhaps most shocking about Peterloo is how consistently awful and stilted his performers enact reams of dialogue—players stuck in a bad museum piece with no way out.