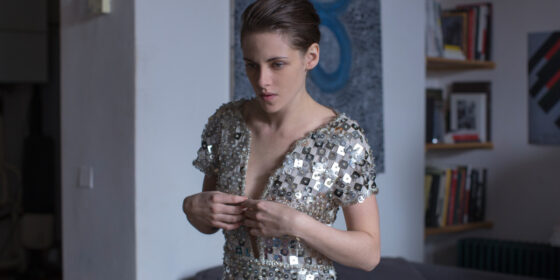 Upon its premiere in Cannes last May, Olivier Assayas’ Personal Shopper quickly became defined by its centerpiece SMS marathon, in which Maureen (Kristen Stewart) engages in a days-long texting back-and-forth with what might be her dead twin brother’s ghost (all while travelling from Paris to London and back), and the scene is indeed probably the pinnacle of that idea—the culmination of more than a decade of attempts, delivering something from the curiosity of what cinema can become as basic human interactions become increasingly virtual. But this exchange is but a piece of Assayas’ hazy impression of life in the age of physical absence, which finds room for a digression into art history (via a documentary primer on Swedish abstract painter Hilma af Klint’s spiritism—viewed on an iPhone, naturally) and an oblique murder subplot that is presented so prominently it feels like a lark.

Rolling in like a fog and evaporating before our eyes, Personal Shopper is the latest in what could be called a tradition of industry-insider ghost movies that seem to make themselves up as they go along (Cronenberg’s Maps to the Stars [2014] being the most recent, Lynch’s Inland Empire [2006] the best). The film, which is essentially about Maureen’s attempts to summon her brother’s spirit, is as light and ephemeral as it is genuinely mysterious and moving, and constitutes a stream of inklings of active ideas—mostly regarding mediation, grief, jealousy, identity, and desire—which just so happen to have emerged in the form of a motion picture. It all comes and then goes, always disconcertingly mellow considering the nerviness of its images, as though it means to evolve into something truly bug-fuck but instead sits there sombre and stone-faced. A genuinely radical piece of filmmaking, if only for its conspicuous eagerness to disappear completely.