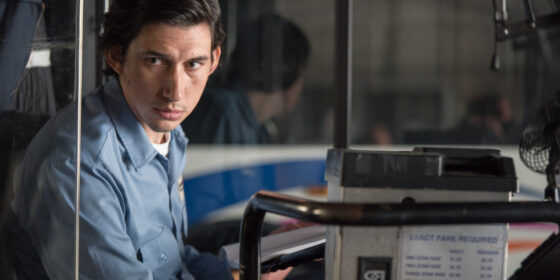 Cannes 2016, if nothing else, presented viewers with object lessons in the rudiments of political cinema—from the hoariest agitprop to films that might not even have been perceived as overtly political. I, Daniel Blake, Ken Loach’s Palme d’Or winner, personifies a certain brand of over-determined, melodramatic social realism, and a wily viewer could predict the conclusion from the clues dropped promiscuously in the first scene. Jim Jarmusch’s Paterson, on the other hand, despite some subtler clues, probably struck many viewers as more or less apolitical, a mood piece far removed from Loach’s sermonizing. Yet what’s compelling about Paterson is the tension—call it dialectical—between Jarmusch’s highly stylized elegy for a once-vibrant industrial city in New Jersey and his self-conscious homage to a poetic sensibility.

A savvy “literariness,” to invoke Viktor Shklovsky’s term, is in fact at the fore of Jarmusch’s film, a project adept at avoiding archness by adhering to the illustrious New Jersey poet William Carlos Williams’ injunction, “No ideas but in things,” quoted in the film by Method Man, and by mimicking some of the attributes of Williams’ modernist epic, also named Paterson. Like Williams’ Paterson, which refers to the city itself, a personage, and the doctor cum poet, Jarmusch’s vest-pocket epic alludes both to the contradictory status of modern-day Paterson (a depressed city with a fabled industrial and labour history) and the name of the poet-protagonist played by Adam Driver. Jarmusch’s Paterson is admittedly not quite as plot-less as his poetic forebear’s.

Still, even by art house standards, the plot is minimal. Paterson, a bus driver happily married to Laura (Golshifteh Farahani), writes poetry in a “secret notebook” during his spare time. Much of the film coincides with the composition of his poetry, although some of the more plot-driven sequences take place at a neighbourhood bar, where alcohol consumption sometimes leads supporting characters to act rashly until they soberly realize the consequences of their actions. As is true with Williams’ Paterson, the Paterson played by Driver becomes acquainted with his city through extensive walks, or, if you like, flânerie. While it’s likely that only graduate students read Williams’ daunting post-Waste Land epic from cover to cover, there’s definitely a symmetry between Jarmusch’s project and his famous precursor’s: Williams muses:

Paterson lies in the valley under the Passaic Falls

its spent waters forming the outline of his back. He

lies on his right side, head near the thunder

of the waters filling his dreams! Eternally asleep,

his dreams walk about the city where he persists

Similarly, Jarmusch’s schema indulges the daydreams of a protagonist constantly drifting in and out of consciousness; oscillating between the protagonist’s point of view and a more neutral vantage point, the approach is in keeping with the contours of Free Indirect Discourse.

There’s a brief scene in Paterson that crystallizes the salutary contradictions of Jarmusch’s modus operandi. On Paterson’s bus route, two teenagers, played by Kara Hayward and Jared Gilman, the young stars of Wes Anderson’s Moonrise Kingdom (2012), discuss the career of Gaetano Bresci, an Italian-American anarchist who once resided in Paterson and went on to assassinate King Umberto I of Italy. Both allusive and playful, the scene self-referentially reminds us of Jarmusch’s fondness for Anderson’s films (not to mention the fact that he and Anderson share a production designer, Mark Friedberg) and the city of Paterson’s rich, if largely forgotten, radical past. Life in the United States of Amnesia being what it is, few schoolchildren, outside of perhaps a Jarmuschian dreamscape, are aware of, say, the Industrial Workers of the World participation in the Paterson Silk Strike of 1913—an event that resulted in the arrest of approximately 1,850 strikers. If the kids played by Hayward and Gilman seem incongruously precocious, the fact that they continually mispronounce Bresci’s surname slightly tarnishes their veneer of sophistication.

Intersecting, rhyming tributaries are something of a motif in Paterson. Just as William Carlos Williams was both a doctor and a poet, Jarmusch mentioned at his Cannes press conference that he was intrigued that Driver had military experience as a marine before becoming an actor, a piece of biographical minutiae he subtly incorporates into his protagonist’s background through a photograph that probably eludes most viewers. Coincidences of an ilk that would have pleased the surrealists become part of the film’s fabric. Poet/bus driver Paterson fortuitously chances upon a schoolgirl with a yen for Emily Dickinson and a talent for writing Ron Padgett-like poems (all of the poems attributed to Driver’s character were either written by Padgett for the film or are pre-existing Padgett verses) with elegant similes comparing waterfalls and falling hair.

Paterson’s marriage to Laura presents the stickiest challenge for Jarmusch since the adoring wife comes close to being a passive muse. Her oddball black-and-white decorating schemes, as well as her foray into hawking designer cupcakes, come perilously close to cutesiness. Somehow, Farahani’s restraint and charm fend off any suggestion of condescension and redeem a character that might have come off, in other hands, as merely ditzy. For what it’s worth, Paterson and Laura’s marriage is also one of the few unproblematically blissful unions in recent cinema.

Paterson is now known to New Jerseyans, if they know anything about it at all, as a poor city, avoided by tourists and locals alike and plagued by gang warfare. Jarmusch’s non-naturalistic conception of Paterson and its residents allows for a utopian rethinking of a city that, at least in recent years, has been associated with little more than urban blight. Jarmusch’s Paterson is instead a cinephilic haven with a cozy repertory cinema that enables the happy couple to attend a screening of Erle C. Kenton’s Island of Lost Souls (1932). This classic horror film provides Laura with an opportunity to encounter, almost mystically, a sort of doppelganger—the “Panther Woman” played by Kathleen Burke. A bar with a multiracial clientele is also one of the hero’s refuges, a beacon of harmony that’s a far cry from the racial tensions reported in Paterson’s local press.

Despite a few minor skirmishes in the bar among soused patrons, Paterson and Laura’s soulful English bulldog named Marvin is responsible for the film’s only bona fide act of violence. Marvin’s almost unforgivable act of aggression suffuses the film with a genuine melancholy, especially if we recall Freud’s coupling of mourning and melancholia. The fact that Paterson and his wife mourn an object, not a person (any more details might constitute an unforgivable “spoiler”) does not lessen the sense that an open wound needs to be cauterized.

In interviews, Jarmusch has cited Frank O’Hara’s poetic credo in “Personism,” a somewhat tongue-in cheek manifesto: “Write a poem to one other person. Don’t write it to the world. Write it as if you’re writing a letter or a note.” O’Hara’s advice can be easily aligned with Jarmusch’s film practice. Unlike Loach, with his penchant for didactic political fables, Jarmusch favours a more intimate critique of everyday life, as well as savouring the utopian possibilities that might emerge if we reject the inanities of our consumer society and, say, combine bus driving with poetry. The goal seems to be what Herbert Marcuse in Eros and Civilization termed, with reference to the work of the 19th-century utopian socialist Charles Fourier, the “transformation of labor into pleasure.”