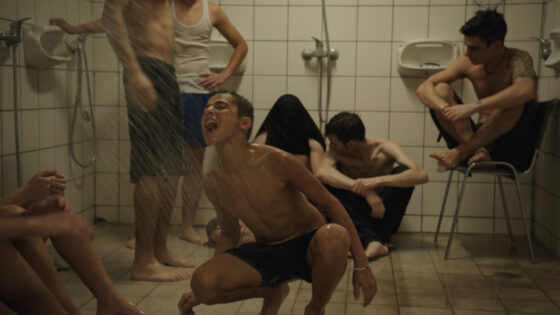 Given that we’re now about ten years into the Greek New Wave, it stands to reason that we would begin to see some younger directors rejecting the rigour and clinical distance that characterized the best-known films of the movement. Park shares the bleak attitude of 21st-century breakdown that we find in Dogtooth (2009), Alps (2011), and Miss Violence (2013). But Exarchou casts her lot with a handheld, agitated style of in-the-throng “realism,” presumably all the better to keep pace with her subjects. The park of the title is Athens’ Olympic Park, a crumbling arena adjacent to the city’s Maroussi district, and this open field is a playground for lower-middle class kids who wrestle, fight, ogle girls, and destroy things, all to pass the time.

Park is largely a study of teenage masculinity without moulding institutions to channel it in any particular direction. Although Exarchou’s ranging camera and preference for close-ups has some tonal resonances with Larry Clark and Harmony Korine, Park is actually rather deterministic in its own way. Much of the action focuses on Dimitri (Dimitris Kitsos) and his girlfriend Anna (Dimitra Vlagkopoulou). Dimitri’s idea of a work ethic is renting his pitbull Ari out for stud service, and later we see him applying essentially the same techniques to Anna.

Anna, for her part, is the soul of the film. We see her hanging with her girlfriends while the boys harass her, asking her to “move your body” or do her leg-stretching moves. (She was a gymnast until a severe accident sidelined her.) She observes her surroundings with a momentary melancholy, then goes right back to performing her role of teenage sexual desirability; more than once, Exarchou cuts from a cavorting Anna straight to Dimitri’s mom, trying to apply the same wiles years later. In ways such as this, Park drives its primary point home over and over again. These are the castoffs of austerity, marking their lives one fuck or fistfight at a time. And while Exarchou’s formal approach promises a kind of observational openness but mostly herds us down a very strict narrative path, this could be the objective correlative for the subject matter. Born into the narrowest of options, these kids may actually think they’re free.