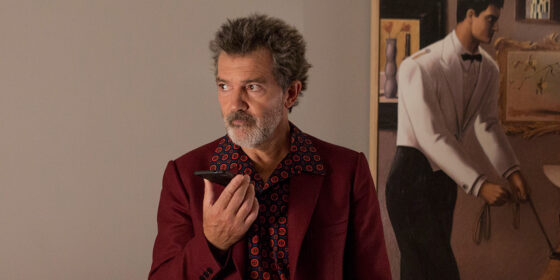 In Pain and Glory, Pedro Almódovar burrows further into his late-style period with all the “intransigence, difficulty and unresolved contradiction” Edward Said promised, with an equally frank and flattering self-portrait of the artist as an aging Antonio Banderas. Though a decade younger and a good deal handsomer than the auteur behind the curtain, with whom he has collaborated since 1982’s Labyrinth of Passion, Banderas makes a good authorial surrogate as Salvator Mallo, a sundowning director coming back to work in a period of chronic pain and addiction who, despite his name, wears Almódovar’s clothes, ambles through his home, and shares some of his memories.

Banderas’ Cannes-approved success doesn’t just hinge on his adeptness at wincing his way through lower-back pain, near-constant migraines, and sad reminiscences while blasted on heroin, despite still looking like an Adonis. It’s also indebted to Almódovar’s playful and somewhat catty acknowledgement of their shared history—and long estrangement, between Law of Desire and The Skin I Live In—in a film that’s largely about the mutual vulnerability and strange alchemy of collaboration, whether between partners, parents, and children, or artists and the physical avatars tasked with realizing their work.

Those who’ve viewed Almódovar’s classicism since All About My Mother (with rare rude blips like I’m So Excited) as a corruption of his torrid natural state will likely see his newest as just another pretty bauble. But Pain and Glory is perceptive about how artists double-down on their aesthetic peccadillos and subject matter in their late periods—audiences be damned—and tender about how bodily wear eventually snakes its way into every artist’s signature, if they toil long enough to have a body of work at all.