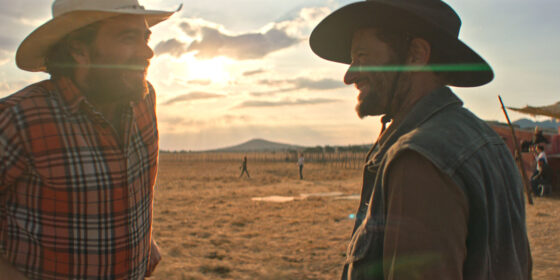 In his Cannes-awarded Post Tenebras Lux, Mexican auteur Carlos Reygadas already dealt with personal matters, reflecting on his role as lover, father and husband in a semi-autobiographical film with a metaphysical bias. Our Time goes even further in his Knausgårdian self-observation as he himself takes the central part as rancher/award-winning poet Juan, while Reygadas’ wife and sometimes editor Natalie López plays Ester, his spouse. Also, the location is his own playground.

The autofiction turns out as a sort of Bergmanesque introspection of a marriage that hides its imbalances behind a liberal, open-minded stance towards extramarital sex. The problems start when Ester has an affair with gringo horse breaker Phil (Phil Burger). Juan can’t suppress his jealousy and accuses his wife of disloyalty because she wouldn’t tell him every detail. In the wrong hands a topic such as this could quickly become banal; however, Reygadas deals with it in a daring and truthful way. His prime interest lies in the moral dilemma of a freedom that one theoretically allows, but practically is not able to fulfill. Our Time is essentially a film about masculinity in crisis: Juan tries to rationalize his uneasiness, and at the same time his compulsive behaviour makes it impossible for him to detach from it.

Is it courageous that Reygadas exposes himself as a rather ridiculous man? The answer must remain ambiguous, as the director never gives up control. With the support of his inventive DP Diego Garcia, he seems very much aware of his abilities. The film fuses different poetic devices to punctuate the couple’s efforts for a mutual understanding and better communication. At the same time, the archaic landscape is used like a subtext, undermining the spirited parle d’amour: a wild bull is effectively used as a reminder that nature never gives up its will.