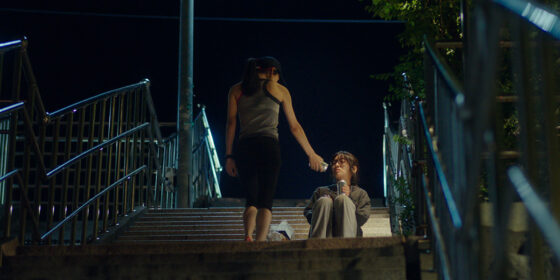 Adrift in a South Korea where professional advancement appears to be the only option, lonely, 31-year-old Ja-young (Moon Choi) has a chance encounter one evening with the beautiful and enigmatic runner Hyun-joo (Ahn Ji-hye), who inspires Ja-young to ditch the civil service exam she’s spent years studying for and move out. But her breakaway comes with a series of false starts, and, too old for most job postings, she takes a position as a lowly temp at a friend’s company. Seeing that all her professional peers are younger and more established, Ja-young tracks down Hyun-joo; as the two become closer, the cracks in Hyun-joo’s life begin to show, but Ja-young still takes inspiration from her.

The relationship between the two women moves from a starstruck fan girl and her idol to two women looking for an authentic connection, but finding one too late. Han often frames the two women together in urban isolation, and the film is divided between the empty evening streets they run though and the empty homes and offices they live in. Han’s camerawork is intimate, understanding that the pleasures of the body are less about the appearance for others than they are about the tactile moments, the pleasures of control. As Ja-young takes up running, initially to be more like Hyun-joo, she finds for the first time in her life a work that is on herself and for herself. As her body changes, she does too: by acting more like Hyun-joo she becomes successful at work, but quickly realizes the limits to this. As she grows, she stops running from her life, and instead runs to maintain control. In another director’s hands Our Body could have easily veered into Single White Female territory, but Han instead creates a sensitive portrait about the difficulty of finding one’s autonomy in a world where that’s rarely an option.