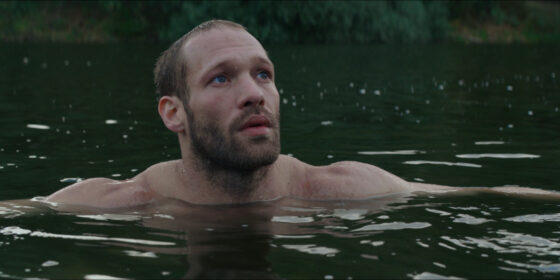 In Trás-os-Montes, the majestic part of northeastern Portugal where António Reis used to make movies, solitary ornithologist Fernando (the body of Jason Statham lookalike Paul Hamy, the voice of director João Pedro Rodrigues) kayaks along a river peering through his binoculars in search of rare birds, especially the endangered black stork. Distracted, he is caught in the rapids and ends up being saved by two female Chinese pilgrims, lost on their way to Santiago de Compostela. This, as they say, is not good. Eventually extricating himself from the women, Fernando forges his own path, and the further he ventures into the forest, the more The Ornithologist morphs into an exploration of the realm of fantasy—as fantastic as the idea of religion itself—as Fernando undergoes a series of extreme masochistic trials in this mythopoetic wilderness on the road to spiritual enlightenment. You know, like being pissed on.

This Birdman is superhero as saint; his journey comes to echo that of the Portugal-born Anthony of Padua, whose popular devotion Rodrigues explored in his 2012 short The Morning of St. Anthony’s Day. Indeed, Rodrigues litters his film, shot by Rui Poças in glorious CinemaScope (a first for Rodrigues), with religious iconography and artistic references. But Rodrigues’ blasphemous exploration of the transformative process of religious awakening, through a serious of wild—at times sexual—adventures focusing on the pleasure and the pain of the body is a modern film, in line with Godard’s Hail Mary (1985) or Buñuel’s The Milky Way (1969). Also kind of a gloss on the western, The Ornithologist meanders in a pleasurable, kind of kooky way, befitting a film whose title evokes an Ornette Coleman album. A trained ornithologist himself, Rodrigues has made what is likely his most personal film since O Fantasma.