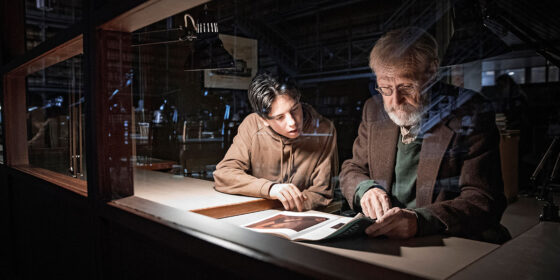 The most dreaded of festival films are not the unwatchable dregs (and it’s certainly not the cream of the crop), but the perfunctory middle-of-the-road selections. What to do when a movie doesn’t inspire much more than a “meh”? How does one expand that out to a couple hundred words?

One solid strategy might be to pad out the word count with plot summary. In this case, Finnish director Klaus Härö’s One Last Deal follows elderly art dealer Olavi (Heikki Nousiainen), whose tiny business is flagging in the shadow of large corporate dealers and trendy-but-sterile modern galleries. Looking to score “one last deal” (yes, he actually says the title of the film in the first act), Olavi suspects one of his corporate competitors may be unknowingly in possession of a long-lost painting of Christ by a Russian master. With the help of his estranged daughter and grandson, Olavi makes a last-ditch play for the Son of God.

With more words to go, another go-to ploy is to home in on some particular aspect in an attempt to suss out what the film is trying to accomplish. Aside from the obvious allegory of deep-pocketed digital/corporate resources vs. Olavi’s old-school analogue approach to research and procurement, Härö also seems to be hinting at some kind of commentary on humility via Olavi’s quest for the film’s holy MacGuffin. However, Olavi’s estrangement from his family is ill-defined (some vague references are made to his lack of interest in his adult daughter’s life), and his eventual redemption in the eyes of his family (and God?) is predictable. In other words…meh.