On the Outskirts: Brian M. Cassidy and Melanie Shatzky’s Interchange 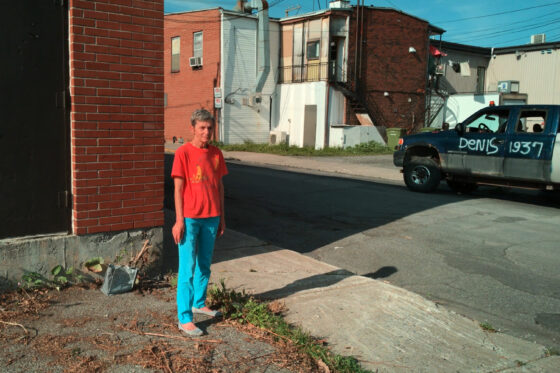 Signs of progress involve mobility, whether in the form of a shorter commute, or simply the ability to go farther, faster. As a city grows, its populations move from one point to another, and some spaces only exist as transitory places. Brian M. Cassidy and Melanie Shatzky’s Interchange focuses on the spaces left behind or in between the places of progress, and those who remain still while the world around them moves forward. Documenting the outskirts of Montreal in a series of static tableaux, Interchange has a clear affinity with the people and spaces only seen through the window of a passing car. By choosing to approach their documentary in a more experimental form, Cassidy and Shatzky reveal more about what isn’t included than what is.

What we see in Interchange’s locations are not abandoned spaces, but ones that have progressed slowly and laterally. The few open businesses are lit up by out-of-date neon signs, markers of past prosperity. Phone booths are not only still in service, but regularly used, servicing people out of the orbit of more recent technological advances. The influence of human life is always present, even though very few humans are seen in the film. These are the underpopulated places, with natural plant life overgrown, surrounding abandoned cars and long-forgotten short cuts. The few people present sit outside of laundromats or in restaurants, starring off into space, not interacting with anyone else. They’re no different than the abandoned storefronts and long-faded lost-dog signs; separated from progress, they are isolated and static. These figures are not named, and there is no narrative; apart from a fleeting instance at film’s end, language only appears via derelict signage.

Interchange’s format reveals more than it tells, treating its subject matter with respect and attention, as well as insight. Surrounded on all sides by overpasses, cars — and by extension the urban progress they represent — are almost always passing by, whether in frame or reflected in storefronts. Rather than commentary about class or the effects of urban development, Interchange chooses to take what it shows on its own terms. Experimental in the sense that the above-mentioned tableaux offer an almost silent depiction of an area currently forgotten, this is also an unusual film in terms of its depictions of Canada. There are no explicit markers of where it’s been filmed, unless you’re already familiar with the area; there’s no contemplation about the city’s history, or its place in present-day Canada. This is a different kind of time for a different kind of place: a site of stillness in a world that is constantly moving, a place as much on the outskirts of conventional representation as on the outskirts of the city.