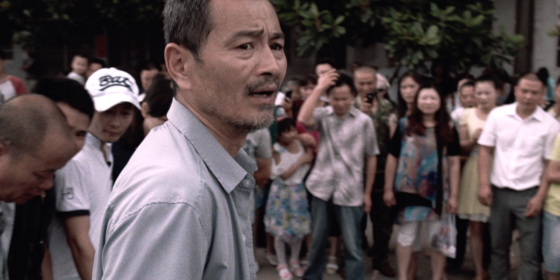 Cab driver Lao Shi (Chen Gang) has his worst fare ever when an inebriated passenger unexpectedly grabs his arm, causing his car to strike a motorcyclist. Quick to act when an ambulance won’t show up, Lao Shi rushes the injured man to the hospital. Yet his good deed only brings him misfortune, starting with having to pay for the victim’s hospital bills, which he’s far from able to afford.

The pile-up continues—Lao’s lawyer friend bluntly informs him it would’ve been better had the man just died—but the film’s interest in exploring the pains of bureaucracy doesn’t necessarily extend to Dardennes-like systemic critique; it’s more a set-up for a genre exercise. As its protagonist’s desperation takes hold, the motivating factors of the wife and children he’s pressured to protect gradually recede from the narrative, and director Johnny Ma focuses instead on the character’s morphing into a violent anti-hero.

If one is not already tipped off by the brisk 78-minute runtime (sparking some nice durational nostalgia for a RKO crime-pic programmer from the 1940s), Ma further delineates his noir intentions by way of glossy aesthetics that diverge from the initial social-realist thrust. He isn’t afraid to take his camera far from Lao Shi, often favouring a God’s-eye view, be it a repeated image of wind blowing through the trees, a variation on the cityscape at night, or even a climactic mud-wrestling match glimpsed from above. A maudlin dream sequence near the end makes it difficult to detect if Ma is reaching for unearned sentiment or a snarky mean-spiritedness towards Lao Shi. But in an art-house context where phony-baloney “humanism” can feel far like a far greater cliché than arch nihilism, it’s preferable to think it’s the latter.