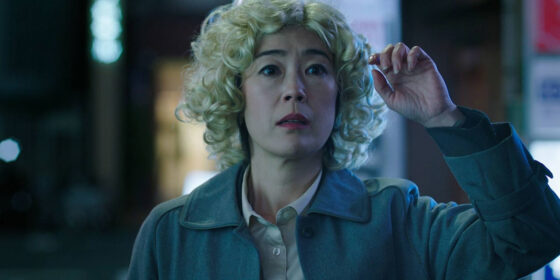 While the exotic appeal of foreign titles to Western viewers is undeniable (especially at major film festivals), few movies ever reverse that dynamic. In Atsuko Hirayanagi’s Oh Lucy!, Josh Hartnett doesn’t play one of his usual roles (or at least the roles he used to get in big Hollywood movies), where his attractiveness is a bonus for viewers and never commented on by the film. On the contrary, this time out, he is completely objectified and othered as an exotic in an Asian setting.

In truth, Hirayanagi’s directorial debut does not focus on its American star, but rather on Setsuko (Shinobu Terajima), a middle-aged woman working a tedious office job (and thus a slightly unconventional movie heroine). While attending English classes after work, Setsuko suddenly finds herself desperately attracted to John (Hartnett), the enthusiastic and outgoing American instructor. Offering his student the Anglicized name Lucy and a blonde wig for the purposes of the class, he does not realize that he is also giving her what she considers a new identity, and a new lease on life. When John suddenly goes back to California with his young Japanese wife, Setsuko fully embraces her American, individualistic, sexually liberated alter ego and follows him to America, obeying her finally unleashed desire and ignoring its potential consequences.

Hirayanagi excels at finding the dark humour in Setsuko’s existential despair while making us sympathize with her temporary madness. By the end of the film, all illusions of an exotic Other are shattered: the wigs come off and dignity gets damaged. But happily, amidst this chaos, it also seems that Setsuko might find some truth.