Off Frame AKA Revolution to Until Victory (Mohanad Yaqubi, Palestine/France/Qatar/Lebanon) — TIFF Docs 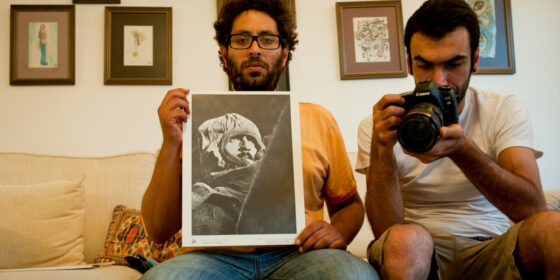 Beyond the rare screening of Far From Vietnam (1967), viewers today have few chances to encounter the Third Cinema movement, that brief but intense burst of nonfiction work generally informed by Marxist-Leninist internationalism whose superstar was a radicalized Jean-Luc Godard. If you attended North American universities in the mid-’70s you would have routinely come upon these films, often shown outside of official university settings, though they weren’t at all considered underground. As most film teachers who attempt to expose their students to this forgotten corner of cinema can confirm, these films feel to contemporary generations like artifacts of some alien civilization—fervent, passionate, for sure, but completely strange and disconnected from the world as we know it.

The utopian politics of Third Cinema is dead and buried—even Cuba is saying buh-bye to all that—but the ways in which this politics inform current conditions, especially in the ravaged Middle East, makes an understanding of Third Cinema fairly vital for sussing out the continuum from the 1960s to now. I’m not aware of a previous attempt to present in any form the Third Cinema work from the Palestinian point of view, making Mohanad Yaqubi’s Off Frame AKA Revolution Until Victory a significant project.

In his research on the Palestine Film Unit (PFU), the film arm of the Palestine Liberation Organization, Yaqubi learned that several reels of the Mustafa Abu Ali documentary Tal El Zaatar (1977) were stored cleanly and intact by Abu Ali in a small archive for left-revolutionary cinema in Rome. From this material, Yaqubi began to painstakingly build a montage essay film, pulling in copies of Third Cinema films found around the world, particularly with film festivals. Off Frame is only an hour long, but it’s packed with short and long clips from a remarkable range of Third Cinema by or about the Palestinians’ Marxist phase. These include such famed non-Arab works as Godard and Anne-Marie Miéville’s Ici et ailleurs (1976), Ralph Thanhauser’s Godard in America (1976), and Adnan Mdanat’s Melody for Four Seasons (1972), alongside PFU works such as Abu Ali’s They Do Not Exist (1974), whose title quotes one of Israel Prime Minister Golda Meir’s more regrettable statements about the Palestinian people.

The only interventions in the footage are insert shots of research work, including placing the reels on a flatbed to view. (A brief coda quietly affirms a still-strong Palestinian identity, as schoolkids in the West Bank stand to salute the Palestinian flag.) The footage reveals a romantic belief in armed struggle, with an almost Guevarista style of iconography—Guevara and the Cuban Revolution are cited in narration as models for the struggle—but with an underlying message that the PLO wanted coexistence with Israel, not conquest. Even then, their awareness of the impossibility of defeating the massive military might of Israel trumped everything.

What’s perhaps most fascinating about watching Yaqubi’s montage is noticing what’s not there: Islamists, or any religious rhetoric. In the internal struggle for power, Palestinian secularists and Marxists had won for the moment. That moment, especially after 1982 and the debacle in Beirut, was to end, and apparently never to come back.