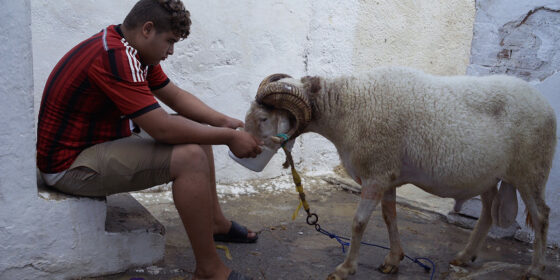 First of all, let me compliment Mr. Sayad’s directorial prowess: I watched Of Sheep and Men with no foreknowledge, and I honestly thought it was a fictional feature. That’s because this documentary is so tightly structured in terms of its focus on two protagonists and their gradually shifting milieu, and even though it was evident that the “characters” were playing themselves, I never would have marked this as a straightforward doc.

In some sense, the minor flaws in Of Sheep and Men pertain to this meticulous structure as well, since Sayad is very insistent that everything we see and hear is subject to one controlling metaphor. This is a story of shepherds in Algiers who have very different attitudes toward the rams in their flock (this being a Parable of Masculinity, the ewes are virtually absent). Young Habib wants to raise his own ram, El Bouq, to be a champion fighter. (Ram fights seem to occupy a role here similar to that of cockfights in other cultural spaces.) The older Samir only sees the rams as commodities, particularly as Eid approaches. The film spends most of its time focusing on the peculiarities of ram fighting, but uses Samir’s aims to corner the local market as a kind of baseline refrain.

Sayad has an odd habit of ending most of his shots with a breathtaking vista of Algiers. We see various hillside neighbourhoods, the main street at night, a stunning natural wonder, or some other aspect of the city in a manner that is far in excess of the needs of the story being told; it’s as though there’s a landscape film struggling to get out of this sheep documentary. But as the film progresses, it becomes clear that Sayad sees these doomed, horn-locking creatures as stand-ins for the Algerian people: at one point, we even hear a radio commentator compare the populace to sheep. So even though Sayad has substantial chops as a filmmaker, he’s not above ramming an idea down our throats.